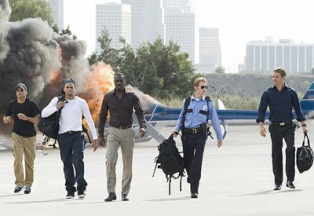 The "One Last Big Heist" is a theme of the crime caper genre which has proven to be quite popular over the years. Takers employs that tried and true formula in entertaining fashion, recycling vaguely familiar scenes from the likes of "The Italian Job," "Ocean's 11," "True Romance," "District B-13" and, perhaps most obviously, "Heat."

When such a cobbling of stock elements creates a uniquely compelling adventure, it's generally referred to as an homage. But if the movie merely seems like a shameless rehash of other picture's greatest moments, we tend to dismiss it as an unworthy rip-off. "Takers" teeters precariously on the dividing line between hit and miss, belatedly getting around to offering just enough edge of your seat excitement to make you stop wondering where you might have seen this or that bit before.

Set in L.A., the film features a talented ensemble headed by hip-hop star T.I. who is typecast as Ghost, a recently-paroled ex-con. As the film unfolds, we are treated to the sight of a smoothly-executed bank robbery which nets the gang (Chris Brown, Idris Elba, Paul Walker, Michael Ealy and Hayden Christensen) a cool $2 million.

However, before they even have a chance to divvy up the take, who should show up unexpectedly, but their former partner in crime, Ghost, looking something like a, eh, well, like someone who just rose from the dead. He's inclined to overlook the fact that he was dumped for pal Jake (Ealy) by his impatient girlfriend (Zoe Saldana) while he was up the river, so long as the boys are willing to let him mastermind an armored car robbery in five days.

They agree, thereby breaking an unwritten rule calling for a year off between burglaries. Several slightly-developed subplots supply the rationale for this deviation from the norm, such as Gordon's (Elba) desperately needing more cash to move his substance-abusing sister (Marianne Jean-Baptiste) from a rehab center to the Caribbean.

The pace of this highly-stylized romp picks up considerably once we've had a chance to become acquainted with each of the guys. What ensues revolves more around visually-captivating detonations, chase scene and fight sequences than around the sort of cerebral fare one ordinarily associates with a cat-and-mouse caper.

DVD Extras: Filmmaker and cast commentary, and a music video by T.I. entitled "Yeah, ya know."