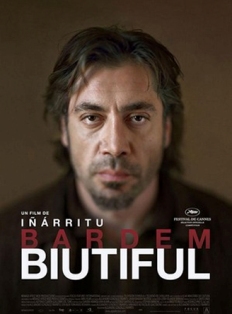 Another Year (PG-13 for profanity) Six-time Oscar-nominee Mike Leigh wrote and directed this British sit-dram revolving around four seasons in the life of a happily-married, middle-aged couple (Jim Broadbent and Ruth Sheen) who find themselves surrounded by relatively-morose friends, relatives and colleagues in emotional crisis. With Lesley Manville, Oliver Maltman and Peter Wight.

Biutiful (R for profanity, nudity, disturbing images, drug use and some sexuality) Bittersweet redemption drama, set in Barcelona, about the effort of a tormented, terminally-ill, career criminal (Javier Bardem) with a couple months to live to reconcile with his philandering, bipolar ex-wife (Maricel Alvarez) and to provide for his kids' care in the wake of his demise. With Hanaa Bouchaib, Guillermo Estrella and Eduard Fernandez. (In English and Spanish with subtitles)

Blue Valentine (R for profanity, a beating and graphic sexuality) Michelle Williams and Ryan Gosling co-star in this slice-of-life drama deconstructing the disintegration of the once-blissful marriage of an increasingly-contentious couple with a young child (Faith Wladyka). With Ben Shenkman, Jen Jones and Mike Vogel.

The Red Chapel (Unrated) Behind the Bamboo Curtain documentary about a couple of subversive Danish comedians (Jacob Nossell and Simon Jul Jorgenson) who get permission to tour North Korea on the pretense of performing their peripatetic vaudeville act as a gesture promoting cultural exchange. (In Danish, English and Korean with subtitles)

The Way Back (PG-13 for violence, a nude image, depictions of physical hardships, and brief profanity) Fact-based bio-pic, based on Slavomir Rawicz's memoir chronicling his undertaking a grueling 4,500 mile trek from Siberia to India following an escape with a half-dozen fellow prisoners from a Russian gulag in the Forties. With Colin Farrell, Ed Harris, Jim Sturgess, Dejan Angelov and Yordan Bikov.