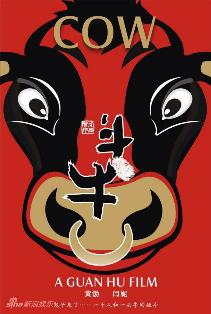 It is China during wartime in 1940, thus we find the embattled nation in the midst of resisting another Japanese invasion. But much of this perilous state of affairs is lost on Niu Er (Bo Huang), an affable, if childlike young man from Yizhen, a barely-arable hamlet located in a rural region of Shandong Province. Everyone in the tight-knit hometown treats the simple-minded fellow like the village idiot, from the friend who teases him about still being a virgin to the elder that's arranged his impending marriage to an outspoken widow (Ni Yan) who vociferously objects that a husband should be her "personal choice."

The prospects of the peasants in this impoverished community are immeasurably brightened upon the unexpected arrival of a mysterious cow much larger than any Asian variety. As it turns out, this gargantuan bovine had been donated by the Dutch to the Chinese Army, which in turn left the slow moving beast behind while passing through Yizhen. The locals see the hefty heifer as a blessing since food is in such short supply and "milk flows like a river" from its massive udders.

Cow-whisperer Niu is assigned the thankless task of caring for the enormous animal and, as fate would have it, the two end up the sole survivors of a Japanese firebomb attack on the city. Initially, the grief-stricken protagonist proves inconsolable as he cries out loud while desperately searching for his mother and fiancée among the piles of charred corpses scattered all over the place.

But rather than face the hard cold truth that they're all dead, Niu's mind prefers to escape backwards in time to when they were still alive. So, subsequently, via a series of increasingly-elucidating flashbacks, the back story leading up to the massacre is intermittently narrated. Even when he periodically returns to the present from that parallel universe to attend to the cow, to feed starving refugees or to fend off Japanese soldiers, Niu's vivid imagination tends to get the better of him.

Written and directed by Hu Guan (Eyes of a Beauty), Cow is a fanciful fairytale which is a wonder to behold. The gifted Guan has cobbled together his multifaceted cinematic masterpiece with elements from a number of ordinarily-incompatible genres, ranging from magical realism to cinema verite to silly slapstick to romantic romp to post-apocalyptic horror to pacifist morality play to the deserted island to the vintage newsreel.

As a heartwarming World War II dramedy revolving around an endearingly-naïve character who manages to maintain his humanity and a sense of optimism in the midst of so much misery, the movie is perhaps most reminiscent of Life Is Beautiful, the bittersweet Holocaust saga which won the Academy Award for Best Foreign Film in 1999. And just as that film was a vehicle for the comedic talents of the rubber-faced Roberto Benigni, this tour de force is apt to serve as the coming out party heralding the arrival of the equally- talented Bo Huang, as the lovable Niu.

A meaningful meditation on man's inhumanity to man, and the first buddy-flick to feature a cow as a scene-stealing co-star.

In Mandarin (Shandong dialect) with subtitles.