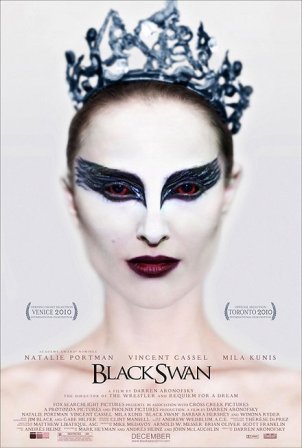 Nina Sayers (Natalie Portman) is a dancer with a leading New York City ballet troupe preparing to stage a production of Tchaikovsky's "Swan Lake." Although previously only a member of the chorus, she's recently been informed by her director, Thomas (Vincent Cassel), that he might like to feature her as the face of the company during the upcoming season.

She's getting a shot because he's decided it's time to replace his prima ballerina, Beth (Winona Ryder), an aging veteran looking a little long in the tooth. However, Nina is only one of a handful of promising aspirants invited to audition for the bifurcated lead role as both the White and Black Swan.

She proceeds to perform flawlessly as the former, effortlessly exhibiting the innocence called upon to play that part. But Thomas nevertheless has reservations about casting Nina when she fails to display the requisite post-metamorphosis sensuality expected of the character's seductive alter ego.

Therefore, to test whether or not Nina has the mettle to capture the carnality of the Black Swan, he pressures her to prove that she's not frigid on ballet's equivalent of the casting couch. Instead of complaining or filing sexual harassment charges, the shocked young lady instead opts to play along, internalizing the angst generated by the violation. After all, she senses that if she fails to accommodate his advances, there are others just waiting to jump at the opportunity, especially her primary rival, Lily (Mila Kunis), a naughty newcomer.

Nina's already fragile psyche is further compromised by the omnipresence of her overbearing stage-mom (Barbara Hershey). Erica Sayers can't help but live vicariously through her daughter, employing reminders about "the career I gave up to have you" to motivate by guilt. As if all of the above pressures weren't enough, when Nina is announced as Beth's replacement, the recently-demoted diva asks, "What did you do to get the role?" insinuating that she must have slept her way to the top.

Directed by Darren Aronofsky (The Wrestler), Black Swan is a harrowing psychological thriller which paints a surreal portrait of the chilling consequences of compromising one's values in quest of success. For the closer our heroine gets to the realization of her lifelong dream, the more we bear witness to the gradual disintegration of a tormented soul swallowed whole by blind ambition.

Beyond the film's riveting front story, its dance sequences prove especially engaging, thanks to a splendid combination of costuming, sound, lighting and choreography as executed by a score of professionals courtesy of the Pennsylvania Ballet and the American Ballet Theater. An intriguing mindbender certainly deserving of all the attention it is apt to earn over the course of awards season, with Natalie Portman certainly a shoo-in for an Oscar Award nomination.

Rated R for profanity, graphic sexuality, and drug use and disturbing violent images.

To see a trailer for Black Swan, click here