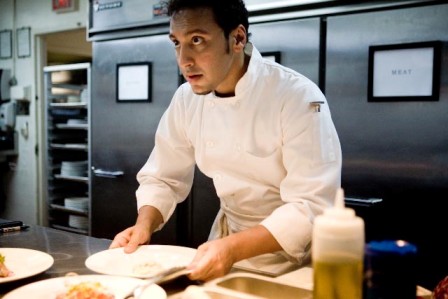 Family Affair (Unrated) Dysfunctional family documentary about three sisters' lifelong effort to recover from being molested by their father over the course of their childhood. Directed by their brother, Chico David Colvard, who shot one of his siblings when he was just nine.

Me, Too (Unrated) Romance drama revolving around the relationship which blossoms between a young man with Down's Syndrome (Pablo Pineda) who falls in love at first sight with a social worker (Lola Duenas) with a checkered past. With Mario Bravo, Antonio Naharro and Consuelo Trujillo. (In Spanish with subtitles)

Nothing Personal (Unrated) Romance drama about a depressed Dutch misanthrope (Anne Verbeek) who throws all of her earthly possessions away before abandoning Amsterdam to wander around Ireland where she finds a kindred spirit (Stephen Rea) living like a hermit in a cottage on the country's west coast.

Today's Special (Unrated) Cross-cultural comedy about a jaded sous chef (Aasif Mandvi) whose passion for cooking is rekindled after he quits his job at a trendy Manhattan bistro to assume the reigns of his family's Indian restaurant. Cast includes Kevin Corrigan, Ajay Naidu, Jess Weixler and Harish Patel.

White Material (Unrated) Post-colonial drama, set in a war-torn African country in the midst of racial strife, about a French coffee farmer (Isabelle Huppert) who refuses to flee like the rest of the whites whose plantations have been nationalized. With Christopher Lambert, Nicolas Duvauchelle and Isaach De Bankole. (In French with subtitles)

William S. Burroughs: A Man Within (Unrated) Bio-pic about Godfather of the Beat Generation featuring recently found footage and interviews with friends and contemporaries of the author of "Naked Lunch," the notorious 1959 novel banned in Boston because of descriptions of pedophilia which subsequently became the subject of a famous Federal obscenity trial.