By Kam Williams, Special to The Skanner News
Published: 02 November 2010 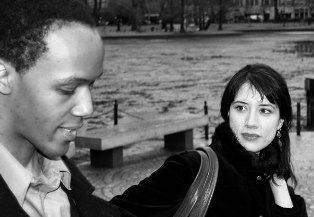 In "Guy and Madeline on a Park Bench," Melancholy Madeline (Desiree Garcia) sits alone freezing on a park bench in Boston contemplating what just happened after being dumped by her boyfriend on a chilly, wintry day. Meanwhile, her equally-wistful ex (Jason Palmer) trudges home through the snow with his trumpet slung lazily over his shoulder. Upon arriving at his apartment, in utter resignation, Guy removes a picture from the wall taken of the two of them during much happier times.

This is the poignant point of departure of "Guy and Madeline on a Park Bench," an intriguing flashback flick deconstructing the demise of a young couple's troubled relationship. The picture is finally finding its way into theaters after receiving rave reviews a year ago on the festival circuit. The delay might be explained by the colorblind casting featuring an African American opposite a Latina in the title roles, both of whom by the way display an enviable versatility while turning in a pair of powerful performances.

Guy is played by Jason Palmer, an accomplished jazz trumpeter recognized as an up-and-comer by Downbeat Magazine. Triple threat Desiree Garcia proves formidable in her own right as Madeline, handling her acting, singing and dancing duties with perfect aplomb.

The movie marks the remarkable writing and directorial debut of recent Harvard grad Damien Chazelle, a gifted wunderkind to be reckoned with. For, with an effortlessness that's nothing short of amazing, he exhibits an encyclopedic knowledge of cinematic history here, interweaving a dizzying number of allusions to the work of his idols behind the camera, legends like John Cassavetes, Jean-Luc Godard and Busby Berkeley.

As engaging as the picture's premise are its original score by Justin Hurwitz and its shadowy cinematography coming courtesy of seductively-grainy, black & white 16mm film. The movie's magical musical renditions, a delightful blend of jazz and show tunes, range from impromptu improvisations to catchy, carefully-choreographed song and dance numbers.

If all of the above isn't enough to whet your curiosity, consider the plot which complicates into a compelling love triangle when Guy's head is turned by flaky temptress Elena (Sandha Khin) while riding the subway. Like a black version of Woody Allen, Guy develops existential angst over his ensuing girl troubles, the difference being that he finds solace playing his instrument instead of kvetching about his feelings to a shrink.

Overall, the vaguely-familiar production has the retro look and feel of a casually-staged, New Wave classic from the Fifties, except that no French is spoken, unless the evocative lyrics of a haunting ballad count. Ultimately, there's no mistaking this impossible to pigeonhole adventure for an unearthed relic from a bygone era, given such unmistakably-modern moments as when Elena responds to a solicitous stranger's pickup line with a resolutely-salty expletive.

A tribute befitting Boston readily comparable to Woody Allen's bittersweet homage to his own beloved Manhattan!