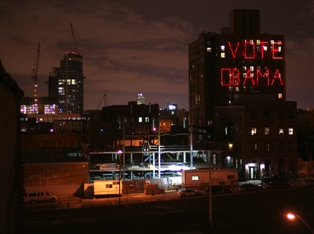 If you want a chance to wax nostalgic about how just two years ago the country came together like on no other occasion since 9/11/01, you might like to check out "11/4/08," a documentary revisiting the events surrounding the historic election of Presidential Barack Obama. Director Jeff Deutchman refers to his movie as a "participatory" venture because it is essentially a cinematic collage cobbled together from numerous video snippets recorded on Election Day.

The numerous contributions come from all over the country, some even from overseas, each preserving treasured moments, whether using professional cameras, cell phones or whatever was handy. And judging from the picture's closing credits, which specifically stipulate that "this film is incomplete; send us your footage," it's pretty clear that director Deutchman still considers the project a work in progress.

Nonetheless, "11/4/08" is actually well-enough executed to stand on its own now, for it does a great job of recapturing, first, the palpable anticipation in the air before the polls closed that day and, then, the feverish euphoria which spread like wildfire across the planet when the realization had sunk in that U.S. had just elected its first African-American President.

Shot in such cities as far apart as Chicago, New York, Los Angeles, New Orleans, Austin and St. Louis, as well as Berlin, Geneva, Dubai and Paris, what the flick effectively recreates is that undeniable sense of shared optimism which has sadly since faded away. From an interview with the Obamas' next-door neighbor, to tete-a-tetes with voters happy to stand in long lines, to patriotic revelers singing the Star Spangled Banner, the event stands as a testament to much more unified times.

There are also some prophetic man in the street interviews where we are treated to predictions for the Obama Era which run a joyful gamut from the elated ("He will lead the country in a direction it's never been before!") to the ecstatic ("We'll never be happier!")

President Obama himself brings down the curtain on the festivities via his victory speech in the Windy City's Grant Park. "("This is your moment. This is your time." An emotionally-engaging film featuring folks truly moved on what many will undoubtedly mark for posterity as the day they were most proud to be an American.

In English, French and German with subtitles.