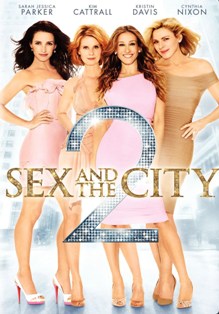 Perhaps not being female or not being privy to the original HBO series seriously limits one's ability to appreciate the adaptations of Sex and the City. Regardless, this critic came away feeling the same about the sequel as I did about the original screen version. This installment is set a couple of years after the end of their first adventure, and again revolves around the camaraderie, carnality and conspicuous consumption of the shallowest quartet of spoiled-rotten New York socialites you ever could hope to meet.

The story is narrated by Carrie (Sarah Jessica Parker) whose marriage to John James Preston (Chris Noth), aka Mr. Big, brought down the curtain on the prior episode. But despite being kept in the lap of luxury by her wealthy hubby, she's already jaded about the state of their no longer exciting relationship.

The scatterplot finally coalesces when Samantha's PR work calls for her to fly to Abu Dhabi, an assignment she accepts only on the condition that her client (Art Malik) extends the "all expenses paid" invite to her girlfriends, too. By the time the filthy-rich oil sheik agrees, Miranda has quit her job, Charlotte has caught her husband flirting with the babysitter, and Carrie has temporarily moved back into her bachelorette pad, developments which conveniently serve to grease the skids for a girls-only overseas getaway.

Upon their arrival in the decadent, jet-set playground, the four find themselves limo'd to the penthouse in the exclusive Sahara Hotel where they are pampered by a bevy of deferential butlers. At this juncture, the movie morphs into a tasteless celebration of Western hedonism during which our heroines defiantly indulging themselves in activities almost deliberately intended to shock and offend the sensibilities of their Middle Eastern hosts.

Let's see, Samantha gets arrested for having sex on the beach, Carrie shares a kiss with an ex-boyfriend (John Corbett), and they all shop 'til they drop in skimpy outfits while cattily belittling the modesty of the local females hidden under headscarves, veils and heat-seeking burkas. A 2½ hour test of patience featuring four embarrassingly-entitled Ugly Americans agonizing over trivia and assorted soap opera drama that is, quite frankly, so patently superficial, you almost wish they'd be cursed with some real problems.

Blu-Ray Combo Pack Extras: Director's audio commentary, DVD and digital copy versions of the movie, "Sex and the City 2 Soundtrack: Behind the Scenes with Alicia Keys," a conversation between Sarah Jessica Parker and the director, plus featurettes entitled: "Styling Sex and the City 2," "Revisiting the 80s," "The Men of Sex and the City," and "Marry Me Liza!"

To see a trailer for Sex and the City 2