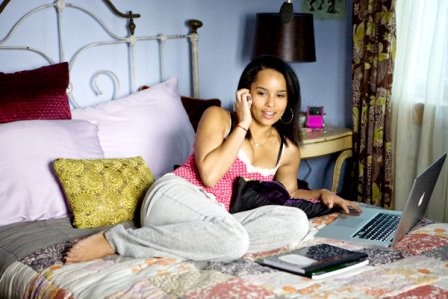 Zoe Kravitz, 'It's Kind of a Funny Story'

It's Kind of a Funny Story (PG-13 for sexuality, drug use, profanity and mature themes) Psych ward comedy based on Ned Vizzini's novel of the same name about a clinically-depressed, 16 year-old (Keir Gilchrist) who gets a new lease on life after checking himself into a mental health clinic. Cast includes Zach Galifianakis, Emma Roberts, Viola Davis, Zoe Kravitz and Lauren Graham.

Life as We Know It (PG-13 for profanity, drug use and sexuality) Katherine Heigl and Josh Duhamel co-star in this romantic comedy about a couple of acquaintances who can't stand each other until they have to live under the same roof to care for their suddenly-orphaned goddaughter (Alexis Clagett) after her parents perish in an untimely accident. Cast includes Josh Lucas, Hayes MacArthur and Christina Hendricks.

Secretariat (PG for mild epithets) Overcoming the odds horseracing saga, reminiscent of Seabiscuit, recounting how the inexperienced owner (Diane Lane) of a cash-strapped stable somehow miraculously raised the first Triple Crown-winner in a quarter century with the help of a wily horse whisperer (John Malkovich) and a jockey (Otto Thorwarth) in need of redemption. With James Cromwell, Scott Glenn and Senator Fred Thompson.

As Good as Dead (R for violence, profanity and drug use) Mistaken identity drama about members of a racist, religious cult who kidnap and torture an innocent man (Cary Elwes) they think is responsible for the murder of their late minister (Brian Cox). With Andie MacDowell, Matt Dallas and Frank Whaley.

Bombay Summer (Unrated) Coming of age drama, set in Mumbai, about the disintegration of the fragile, forbidden friendship of three youngsters (Tannishtha Chatterjee, Samrat Chakrabarti and Jatin Madan) in the face of loss and betrayal. (In Hindi and English with subtitles)

Budrus (Unrated) Middle East documentary about a pacifist Palestinian who, with the help of his 15 year-old daughter, led a nonviolent campaign to unite the Hamas, Fatah and Israeli factions of their West Bank community in order to save their village from violent destruction at the hands of the rival parties. (In Arabic, Hebrew and English with subtitles)

GhettoPhysics (R for profanity and sexual references) Street smart documentary takes a novel look at the world by suggesting that everyone's either a pimp or a ho'. With appearances by rapper Ice-T, Princeton Professor Cornel West, Cynthia McKinney and writer/director E. Raymond Brown.

Going Blind (Unrated) Diminished vision documentary offering a glimpse at the challenges faced by folks dealing with the loss of their sight.

Inside Job (Unrated) The worst recession since the Great Depression is the subject of this documentary chronicling the causes of the global financial meltdown of 2008 which led to over $20 trillions in losses on Wall Street while causing millions to lose their jobs and homes.

I Spit on Your Grave (Unrated) Remake of the 1978 revenge thriller about a writer (Sarah Butler) raped at her country retreat in the woods and left for dead who survives to exact a measure of vengeance on her attackers. With Chad Lindberg, Tracey Walter and Daniel Franzese.

It's a Wonderful Afterlife (PG-13 for violence and drug use) Dark comedy, set in London, about a vengeful, East Indian widow (Shabana Azmi) who goes on a killing spree slaying the blind dates who rejected her Rubenesque daughter (Goldy Notay). (In English, Hindi and Punjabi with subtitles)

Jim (Unrated) Sci-fi drama about a cash-strapped widower (Dan Illian) contemplating suicide who is prompted by his wife's ghost (Vanessa Morris-Burke) to instead impregnate one of her frozen eggs with the help of a biotech company with a weird agenda.

Letters to Father Jaakob (Unrated) Scandinavian tale of redemption about a recently pardoned convict (Kaarina Hazard) who learns a lesson about self-forgiveness after taking a position at a secluded parsonage helping a blind cleric (Heikki Nousiainen) answer the pile of letters he receives from the needy. (In Finnish with subtitles)

Marwencol (Unrated) documentary about Mark Hogancamp, a married man from upstate New York who built an elaborate 1/6th scale replica of a World War II battle scene while recovering from brain damage suffered during a bar fight which left him with amnesia and impaired hand-eye coordination.

Rachel (Unrated) Middle East documentary revisits the circumstances surrounding the death of Rachel Corrie, the 23 year-old American activist who was flattened in 2003 while serving as a human shield between an Israeli bulldozer and a home on the Gaza Strip suspected as serving as a hideout for of Palestinian guerillas.

Stone (R for violence, graphic sexuality and pervasive profanity) Crime caper about a convicted arsonist (Ed Norton) who has his wife (Milla Jovovich) seduce a member (Robert De Niro) of the parole board in order to secure an early release.

Tamara Drewe (R for profanity and sexuality) Makeover comedy about a high school ugly duckling's (Gemma Atherton) reversal of fortune into Ms. Popularity when she returns to her hometown as an adult after having cosmetic surgery. With Luke Evans, Dominic Cooper and Roger Allam.