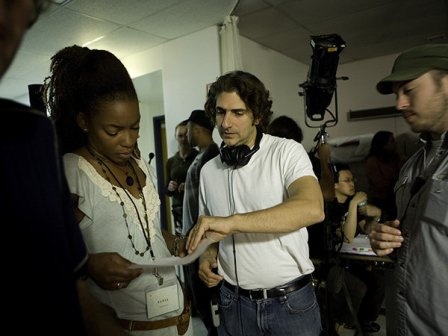 Case 39 (R for violence, terror and disturbing images) Renee Zellweger stars in this psychological thriller about a naïve social worker who rescues an abused 10 year-old (Jodelle Ferland) from her parents (Callum Keith Rennie and Kerry O'Malley) only to discover that the girl isn't as innocent as she looks.

Hatchet II (Unrated) Revenge-fueled, fright sequel features scream queen Danielle Harris reprising her lead role of Marybeth with the survivor returning to the swamps of Louisiana assisted by an army of hunters in the search for the bayou butcher (Kane Hodder) behind the slaughter of her family. Cast includes Tony Todd, John Carl Buechler and Tom Holland.

Let Me In (Unrated) Remake of Let the Right One In, the Swedish horror flick about a bullied, 12 year-old boy (Kodi Smit-McPhee) who discovers that his new friend (Chloe Moretz) and her mute father (Richard Jenkins) are hiding a big secret. With Elias Koteas, Cara Buono and Seth Adkins.

Barry Munday (R for sexuality and profanity) Castration comedy about a wannabe ladies man (Patrick Wilson) who awakens in a hospital with his testicles missing after being attacked in a movie theater. To add insult to injury, the newly-neutered eunuch learns he's being sued for paternity by a woman (Judy Greer) he can't even remember sleeping with. Cast includes Chloe Sevigny, Billy Dee Williams, Cybill Shepherd, Malcolm McDowell and Colin Hanks.

Douchebag (Unrated) Sibling rivalry comedy about a groom-to-be (Andrew Dickler) who, at the suggestion of his fence-mending fiancée (Marguerite Moreau), embarks on a road trip with her and his estranged brother (Ben York Jones) in search of the latter's childhood sweetheart so he can have a date for the wedding. With Nicole Vicius, Amy Ferguson and Wendi McLendon-Covey.

Freakonomics (PG-13 for violence, sexuality, nudity, drug use and brief profanity) A half-dozen directors contribute segments to this pop culture documentary illustrating a variety of the unorthodox economic ideas contained in Steven Levitt and Stephen Dubner's best seller of the same name exploring the "Hidden Side of Everything."

Inspector Bellamy (Unrated) Crime caper, directed by the recently-deceased Claude Chabrol, revolving around Paris' Police Commissioner (Gerard Depardieu) whose quiet vacation with his wife (Marie Bunel) at their country home is disturbed by the arrival of his ne'er-do-well stepbrother (Clovis Cornillac) and a mysterious stranger (Jacques Gamblin) in need of protection. (In French with subtitles)

Leaving (Unrated) Romance thriller, set in the South of France, revolving around a happily-married psychotherapist (Kristin Scott Thomas) who recklessly risks her bourgeois lifestyle by embarking on a passionate affair with her ex-con handyman (Sergi Lopez). (In French, Catalan and English with subtitles)

S&Man (Unrated) Peeping Tom documentary explores the voyeuristic nature of mainstream horror films via an examination of snuff, bondage and other fetish films.