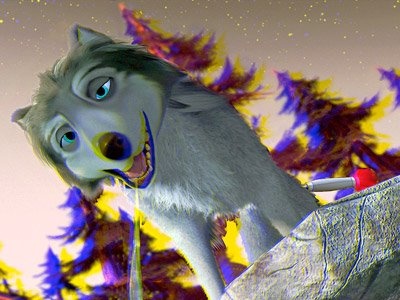 Alpha and Omega (PG for crude humor and mild action) Animated, 3-D road adventure about a wily, female wolf (Hayden Panettiere) forced to embark on a perilous, cross-country trek home with a trash-talking member of the pack (Justin Long) after they're both trapped and shipped 1,000 miles away by park rangers. Voice cast includes Danny Glover, Christina Ricci, Larry Miller and the late Dennis Hopper.

Devil (PG-13 for profanity, sexual references, violence, disturbing images and mature themes) Claustrophobic horror flick about five strangers (Bojana Novakovic, Logan Marshall-Green, Bokeem Woodbine, Jenny O'Hara and Geoffrey Arend) trapped in an elevator who turn against each when they realize that one of them is Satan. With Chris Messina, Matt Craven and Kim Roberts.

The Town (R for sexuality, drug use, graphic violence and pervasive profanity) Ben Affleck directs and stars in this Beantown crime caper, based on Chuck Hogan's best seller "Prince of Thieves," about the mastermind of a bank heist who finds himself falling for the pretty teller (Rebecca Hall) his gang took hostage during a recent robbery. With Jeremy Renner, Chris Cooper and Pete Postlethwaite.

The Anchorage (Unrated) Surreal drama, set in the Stockholm archipelago, about a hardy, Earth mother (Ulla Edstrom) living alone on an island whose quiet existence is disrupted by the arrival of a rugged deer hunter (Bengt Ohlsson). With Elin Hamren and Marcus Harrling. (In Swedish with subtitles)

Catfish (PG-13 for sexual references) Social networking documentary about Nev Schulman, a young photographer who gets the surprise of his life when he travels from NYC to Michigan to rendezvous with the "19 year-old beauty" who'd friended him on Facebook to seduce him into an internet romance.

The Freebie (R for profanity and sexuality) Infidelity drama about a couple (Dax Shepard and Katie Aselton) in a lackluster relationship who spice up their love life by allowing each other the freedom to have a one-night stand. Cast includes Scott Pitts, Leonora Gershman and Ken Kennedy.

Gasland (Unrated) Eco-expose' uncovering the widespread employment by energy companies all over America of a hydraulic, gas extraction process patented by Halliburton which is leaving communities with water so polluted it can often be lit on fire as H2O flows from the tap.

The Girl (Unrated) Coming of age drama, set in 1981, about a 10 year-old girl (Blanca Engstrom) left to fend for herself home alone in Sweden while the rest of the family spends the summer doing missionary work in Africa. With Shanti Roney, Annika Hallin and Krystof Hadek as the Balloon Man. (In Swedish with subtitles)

Jack Goes Boating (R for profanity, sexuality and drug use) Philip Seymour Hoffman makes his directorial debut and stars in the title role of this romantic comedy revolving around two working-class, NYC couples, one (Hoffman and Amy Ryan) in a budding relationship, the other (John Ortiz and Daphne Rubin-Vega) struggling to save their crumbling marriage.

Kandahar Break (Unrated) Afghan romance thriller, set in 1999, about a British mine sweeper (Shaun Dooley), in cahoots with the Taliban, who suddenly needs to flee the country after falling head over sandals for the fetching winner (Tatmain Ul Qulb) of a wet veil contest. (In English and Pashtu with subtitles)

Kings of Pastry (Unrated) 16 gourmet bakers vie for the coveted title of France's best pastry chef in this mouth-watering documentary chronicling the country's culinary answer to the Pillsbury Bake-Off. (In English and French with subtitles)

Last Day of Summer (R for violent images, drug use and pervasive profanity) Dark comedy about a fast food employee (DJ Qualls) about to go postal on his abusive boss (William Sadler) who instead impulsively opts to kidnap a cute customer (Nikki Reed).

Never Let Me Go (R for nudity and sexuality) Sci-fi fantasy of love and betrayal revolving around a tight-knit trio of classmates (Carey Mulligan, Andrew Garfield and Keira Knightley) whose secret fate is revealed only after graduation from their deceptively-idyllic, British boarding school. With Charlotte Rampling, Sally Hawkins and Nathalie Richard.

The Other City (Unrated) HIV documentary puts a face on the escalating AIDS epidemic in Washington, DC, where African-American females living virtually in the shadow of the White House are contracting the disease at an alarming rate higher than citizens in the capitals of most impoverished African countries.

Picture Me (Unrated) Catwalk documentary offers an inside look at the ugly underbelly of the fashion world as witnessed by runway supermodel Sara Ziff between the ages of 15 and 20.

The Temptation of St. Tony (Unrated) Midlife-crisis drama, set in Estonia, about a happily-married, middle-aged, middle-manager (Taavi Eelmaa) who decides to explore his dark side after wondering where behaving morally all his life has gotten him. With Tiina Tauraite, Ravshana Kurkova and Sten Ljunggren. (In Estonian, English, French and Russian with subtitles)