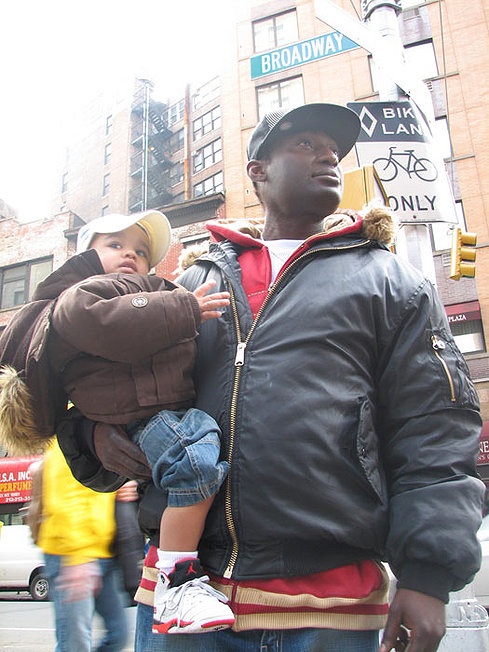 Lucky (Prince Adu) and his boss, Levon (Karren Karagulian), are a couple of immigrants, the former from Ghana, the latter from Lebanon. Together, they run a shady operation selling counterfeit merchandise out of the backroom of a shop in midtown Manhattan. Lucky works the sidewalk, pressuring passersby to enter the store by whispering promises of discount-priced knockoffs of products like sneakers and designer bags.
But what their potential customers don't know is that once they enter the legit-looking front, they'll then be asked by Levon to pass through a door to scale a long flight of stairs just to check out the contraband Lucky has them salivating over. Needless to say, the daily grind of such a hand-to-mouth hustle is pretty exhausting, especially when you always have to keep one eye out for cops on the bunco squad patrolling for smooth-talking con men.
However, Lucky's job becomes even more challenging when Linda (Kat Sanchez), an ex-girlfriend he hasn't seen in a couple of years, shows up and hands him a toddler (Aiden Noesi) right on the street. After saying that he's the father, she takes off in a car with her new boyfriend and disappears without ever bothering to mention the child's name.
Lucky is at a loss as to what to do next because, as an illegal alien, he's afraid to bring the kid to the police. Furthermore, he's not sure he's the father, and it soon becomes clear that caring for "Prince" is going to be a draining, time-consuming proposition. Plus, he's going t have a lot of explaining to do to his main squeeze, Karina (Keyali Mayaga).
So unfolds Prince of Broadway, a harrowing baby-mama drama, "presented by" Lee Daniels. It's hard to say exactly what the Oscar-nominated director's contribution to the project might be, since his name doesn't otherwise appear in the credits. But this relentlessly-grim tale of survival does resemble Precious more than any other picture in recent memory.
For, the screen is littered with trashy characters who look like they should be settling their differences on The Jerry Springer Show. In addition, the tension is similarly wound around a question of paternity to be resolved by the dramatic announcement of DNA test results.
The movie marks the noteworthy directorial debut of one Sean Baker, who credits his flick's super-realistic feel to encouraging his cast to improvise their dialogue. New York City as a disturbing dystopia where it's hard out there not just for a pimp, but for an African scam artist, too!

See a trailer for Prince of Broadway