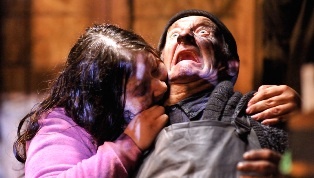 The legendary George Andrew Romero, best known for his "Dead" franchise, is still making monster movies some forty-plus years after making an unforgettable directorial debut with Night of the Living Dead (1968).


"Survival of the Dead" will not disappoint diehard Romero fans who know what to expect of a campy production from the B-movie maven. Thus, the garishly videotaped adventure features cheesy makeup and cheap trick photography that leaves a lot to be desired, considering the state-of-the-art effects generally employed in the genre nowadays.
Nonetheless, Survival of the Dead's technical failings are more than offset by its novel screenplay and by decent acting jobs turned in by a capable cast. The story is set on Plum Island, a remote isle off the coast of Delaware where, you guessed it, a horde of man-eating ghouls are causing major mayhem. The action unfolds just after the conclusion of Diary of the Dead, which means in a post-apocalyptic world where zombies now outnumber the living.
However, that dire predicament does nothing to entice the two warring clans inhabiting Plum Island to put aside their differences temporarily. For generations, the O'Flynns and Muldoons, presided over by patriarchs Patrick (Kenneth Welsh) and Shamus (Richard Fitzpatrick), respectively, have been locked in a mortal feud on the order of the legendary Hatfields and McCoys.
So, we find the families fighting each other as much as the demons, especially since they disagree about how to deal with the plague. The Muldoons are inclined to capture and quarantined the zombies with the hope of finding a cure, while the O'Flynns' approach is to kill any of the monsters they see on sight. True to form, Romero has injected his high attrition-rate splatterflick with just enough social commentary and gallows humor to elevate the tale above your typically senseless gore fest.
A more cerebral means of cinematically satiating one's wanton craving for gratuitous gore!

To see a trailer for Survival of the Dead