By Kam Williams for The Skanner News
Published: 13 August 2010 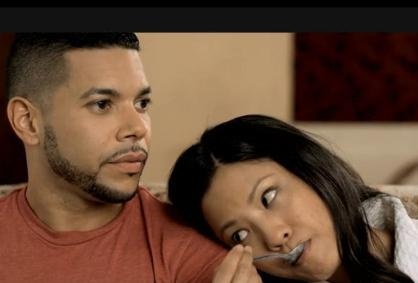 Angela Yang (Karin Anna Cheung) is so promiscuous that the only way she can remember her lovers is by taking impromptu, post-coital headshots of them with her cell phone. The happily-in-heat hedonist has accumulated quite an impressive collection of photos over the years, scribbling an appropriately-descriptive nickname under the picture of each of her satisfied conquests.
Unlike her very conventional sister, Juliet (Lynn Chen), who has already settled down and started a family, Angela has no plans to marry anytime soon. After all, she doesn't see herself as a slut, but merely as a female version of your typical, testosterone-driven male player with an insatiable sexual appetite. The Skanner News Video: trailer.
However, Angela's free love philosophy starts to come apart at the seams soon after a visit to the obstetrician (Sherry Weston) confirms the results of an early pregnancy test. She's expecting! With no idea who the dad is or what to do next, she rushes to the side of her big sister who insists that the only option is to have the child ("Abortion is murder!) and to find the father.
Once Angela agrees to have the baby, she realizes she'll need to determine paternity in order to inform the sperm donor. At this juncture, those trophy photos from her one-night stands come in quite handy, as we watch her shuffle through the deck to narrow down the list of potential fathers to the handful she had unprotected sex with.
She proceeds to settle on four viable candidates: "Five-Second Guy" (Danny Vasquez), a smooth-talking Latino who turned out to be a disappointing premature ejaculator; "Mystery Man" (Archie Kao), an image-conscious, Chinese-American politician running for city council; "Mr. Hottie" (Chris Zylka), a barely-legal, Caucasian college kid whose bones she'd jumped in a dormitory; and "Nice but Boring Guy" (Randall Park), an awkward nerd of Korean extraction she'd slept with more out of sympathy than lust. Then, with the help of her gay best friend, Gabriel (Wilson Cruz), Angela dreams up a variety of creative ways to obtain DNA samples without arousing suspicion and unnecessarily generating baby-daddy drama.
The tension builds up against the increasingly-urgent time constraint of a gradually-swelling belly as the once-wanton sexaholic finds herself suddenly cured and magically marriage-minded. Still, not only does she need to find her fetus' genetic match, but she's hoping for a whirlwind romance and a wedding, all before the arrival of their little bundle of joy. That's an awful lot of dominoes that need to fall for that storybook ending.
Directed by Hong Kong-born Quentin Lee (Ethan Mao), The People I've Slept With takes an alternately jaw-dropping and lighthearted look at 21st Century mating habits as apt to leave you in stitches as in shock over the ever-evolving state of the human relating. Credit this gifted filmmaker for painting his thought-provoking picture with a comfortably-colorblind and culturally-diverse cinematic brush where even the borders between the gay and straight worlds have been imperceptibly erased to boot. Accolades are also in order for the attractive and talented Karin Anna Cheung for rising to the challenge of the demanding role of Angela with an admirable gusto, whether she's shedding her clothing to assume a compromising position or convincingly conveying the emotional arc of her rapidly-maturing character.
A two-fisted female taking responsibility for her own orgasm, as well as its consequences, ala Teri Garr in Tootsie.