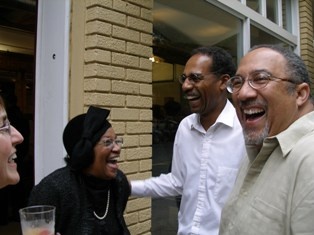 Anthony I. Allen never knew W.D. Allen, his grandfather and the original owner of the Golden West Hotel, but he knows all the stories. From the time he was a child growing up in Los Angeles, Anthony Allen learned all about Portland's historic Black hotel -- located at 7th and Broadway Downtown -- one of the only formal lodging houses in town that catered to African Americans in the first few decades of the 20th century.

On Oct. 22, Allen and many others – including PSU Black Studies Professor Dr. Darrell Millner, W.D. Allen's great-granddaughter Nicole Allen, City Commissioner Randy Leonard — gathered at Carlton Hart Architects to celebrate the unveiling of the new Golden West Historical Display. Visible from the street, the display features photos, historical descriptions and even an audio guide to what was once the center of African American culture in Portland.

Pictured above is Anthony I. Allen, Bill Hart of Carlton Hart Architects, who helped design the panels, and a supporter at Thursday's event.