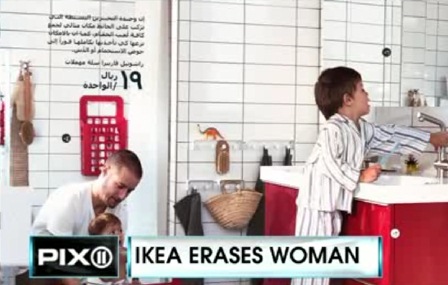 (CNN) -- In male-dominated Saudi Arabia, women long have lacked a seat at the table of power.

That harsh reality was reflected in an Ikea furniture catalog distributed in Saudi Arabia that left them missing from other tables as well.

Images of women were airbrushed from copies of the Swedish-based retailer's annual catalog shipped to the religiously conservative Islamic kingdom.

For example, one photo in the publication showed a mother, father and two children in a bathroom. In the Saudi version, the image of the woman was removed.

The news, first reported by Sweden's Metro newspaper, nearly made Sweden's trade minister, Ewa Bjorling, fall off her chair -- or throw one.

"I regret that there is still such a long way to go when it comes to gender equality in Saudi Arabia, which these images clearly show," she said.

"As long as women are hindered from visibility and work outside home, Saudi Arabia will lack 50% of their human capital."

Ikea apologized Monday for the airbrushing, saying it "regrets what has happened and understands that people are upset."

"It is not the local franchisee that has requested the retouch of the discussed pictures. The mistake happened during the work process occurring before presenting the draft catalog for Ikea Saudi Arabia. We take full responsibility for the mistakes made," the company said.

Attaining equal rights has been an uphill battle for Saudi women.

There's been a "push to get women into the workforce, which religious conservatives are fiercely resisting," Human Rights Watch said in an August report.

But women are up against a "different but equal" notion of gender equality in Islam.

"Men have a duty to provide for women, women in turn must obey their male guardians and care for house and children," the rights group noted, citing a 2003 scholarly treatise.

"We're beyond that right now in Saudi Arabia," she told CNN. "With Internet and satellite TV, there's really no such thing anymore as blacking out women or airbrushing out women. I would be upset if something like Google was doing it, but for Ikea to do it, that's just marketing -- it's not such a big deal."

Images in international magazines had been customarily censored. But times seem to have changed a bit, she said.

A year ago, for example, the shoulders and stomachs in the images of women in tube tops would colored with a marker.

"They would go through each individual magazine with a black marker and color in any skin that was showing or tear out pages," she said.

"Now they don't. It's strange -- almost like they gave up. I saw a woman wearing a miniskirt on the cover of a magazine when I was at the grocery store," she said.

Just the same, she said, censored images are not unusual.

"I don't think it's right, but it's the culture. Even women who wear the hijab who appear in street advertising posters -- you see that their faces are pixelated and blurred."