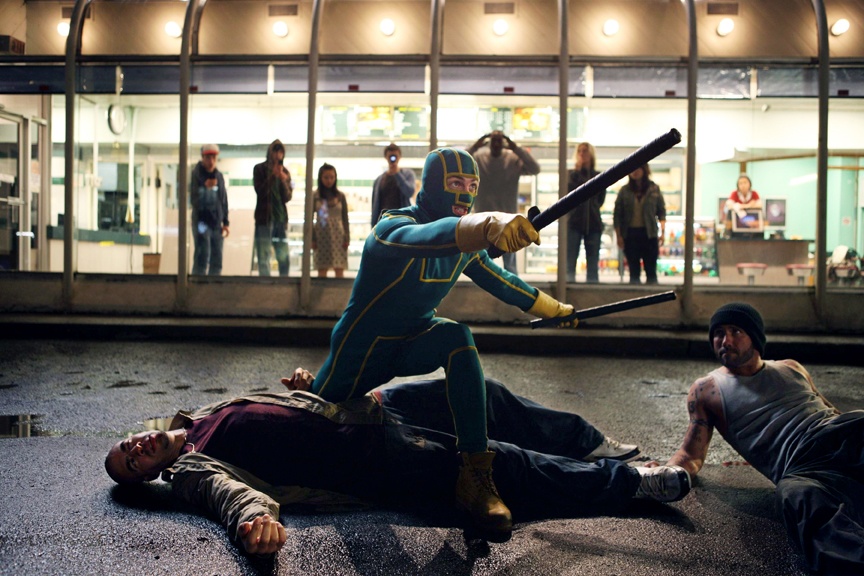 This Marvel Comics superhero adventure because it revolves around a foul-mouthed, 11 year-old heroine who takes delight in spilling the blood of every last one of her evil adversaries. Plus, other underage characters are depicted engaging in a variety of morally-objectionable activities ranging from premarital sex to smoking marijuana to sadistic slaughter. So, this movie is appropriately rated R, a clear signal that it's inappropriate for impressionable young minds. With that fair warning out of the way, let me say that, Kick Ass nevertheless just happens to be the best comic book-to-screen adaptation since The Dark Knight.


Set in New York City, it stars Aaron Jonson as unassuming Dave Lizewski, a nerdy teen whose only special power at the point of departure is being invisible to girls, especially Katie Deauxma (Lyndsy Fonseca), the cute classmate he has a secret crush on. This low social standing explains why Dave starts fantasizing about morphing into a crime-fighting alter-ego like the superheroes in his comic book collection.
And after being mugged for his lunch money by some bullies in front of bystanders who did nothing, he decides it's time for somebody to stand up for the neighborhood. Next, fashioning a crude costume out of a scuba diving outfit he buys on eBay, he starts roaming the streets as Kick-Ass.
The masked vigilante eventually develops some decent fighting skills, and becomes an internet sensation when some of his successful exploits are posted on Youtube. That popularity, in turn, inspires a number of others to follow suit, including Damon and Mindy MacReady, a father-daughter team who don masks and costumes as Hit-Girl (Chloe Moretz) and Big Daddy (Nicolas Cage).
Hit-Girl is only 11, yet remains perfectly poised disemboweling bandits, having been weaned on an array of deadly weapons by her gun-collecting dad, a disgraced ex-cop with a score to settle with drug kingpin Frank D'Amico (Mark Strong). Between the wanton bloodletting and the incessantly-salty dialogue Kick-Ass is admittedly jaw-dropping, especially since kids are responsible for most of the splatterfest's chatter and mayhem.
An alternately shocking and comical cross of Death Wish and The Little Rascals not to be missed by mature audiences.

To see a trailer for Kick-Ass