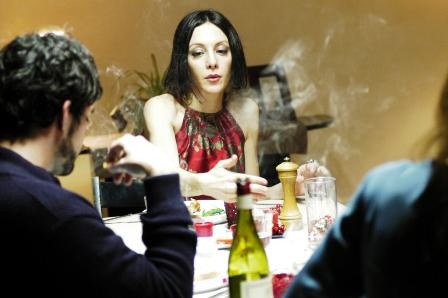 If you like unraveling multi-layered mysteries, but are interested in a whodunit a little less mind-bending and less time-intensive than the thoroughly-confounding Inception, then look no further than this readily-digestible character-driven drama. The facts here are quite simple. Nora (Anna Gutto) and Ken (Nick Stevenson) have decided to host a birthday party for a friend at their sumptuous, beachfront summer home with a view.
Unfortunately, complaining of a headache from a minor car accident which occurred en route, the guest of honor upon arriving excuses herself to an upstairs bedroom to lie down to recuperate. Ken, the only person to check-in on her, offers her aspirin as relief from the aches and pains caused by the fender-bender.
Meanwhile, miserably-married Marc (Adam Henry Garcia) is hitting on Veronica (Monica Mondelli), a fey femme fatale who's back in the States after eight years ostensibly spent soul-searching in Europe. He hates his wife and kids, and she's looking for love and claims to have discovered the secret of happiness, which makes them seem almost meant for each other.
But before the two have a chance to consummate, the birthday girl is suddenly discovered dead as a doornail. This development temporarily puts a damper on the festivities, between everybody pointing fingers at each other and the summoned detective's (Eon Grey) questioning.
Gradually, the gathering disintegrates into a series of inscrutable exchanges, with Nora and Ken's relationship revealed to be on shaky ground.
Allegiances shift, players couple and uncouple, with motivations remaining rough to read at every turn. Nonetheless, for all its infuriating obscurity, The Contenders proves to be an intriguing enough affair which keeps you guessing about exactly what's going on to the end, even if all roads lead to less than satisfactory finale.
The movie marks the promising feature film writing and directorial debut of Italian Marta Mondelli, who co-stars as the sultry siren Veronica. 30 year-old Mondelli might have benefited from a little help adapting what was reportedly originally a stage play into a script, especially if it needed to be translated into English, too. That being said, I'm not too proud to admit that her micro-budgeted indie flick kept this idiot in suspense for the duration, whether by design or due to an inherent absence of clarity.
Inception-lite!

To see a trailer for The Contenders, visit:
http://www.thecontendersthemovie.com/trailer