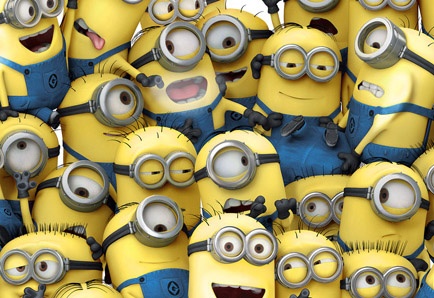 Despicable Me (PG for mild action and crude humor) 3-D computer-animated comedy, set in an otherwise idyllic suburban neighborhood, where a wicked weirdo (Steve Carell) with a black house and a dead lawn is secretly hatching a diabolical plan to steal the moon with the assistance of an army of minions. Hope for averting the disaster rests with three orphans (Dana Gaier, Miranda Cosgrove and Elsie Fisher) in need of a father who see some potential for redemption in the evil villain. Voice cast includes Kristen Wiig, Jason Segel, Danny McBride, Will Arnett, Dr. Ken Jeong, Russell Brand and Julie Andrews.

Predators (Unrated) Sci-fi sequel about a group of elite warriors who discover that they were brought to another planet by a race of bloodthirsty alien creatures to be hunted like prey in a human game reserve. Cast includes Adrien Brody, Topher Grace, Laurence Fishburne, Alice Braga and Danny Trejo.

Around a Small Mountain (Unrated) Serendipitous road saga, directed by French New Wave legend Jacques Rivette, revolving around an Italian Good Samaritan (Sergio Castellitto) who starts stalking the striking motorist (Jane Birkin) he rescued after her car broke down on a deserted highway. (In French with subtitles)

The Girl Who Played with Fire (Unrated) Action thriller, based on the Stieg Larsson novel, about a computer hacker (Noomi Rapace) who joins forces with a journalist (Michael Nyqvist) to try to crack a sex-trafficking ring, only to end up a fugitive after being accused of murder. (In Swedish, Italian and French with subtitles)

Winnebago Man (Unrated) Viral video documentary about Jack Rebney, aka Winnebago Man, the foul-mouthed, corporate pitchman who became something of an internet sensation when the outtakes he shot in 1988 for a car commercial later ended-up on Youtube.