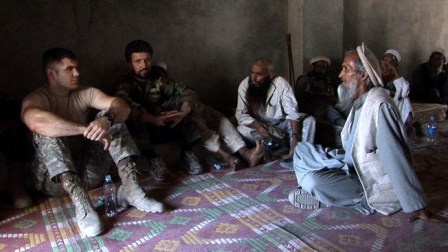 This riveting documentary couldn't have asked for a more timely release, given the breaking brouhaha over General Stanley McChrystal's caustic comments about the Obama Administration's handling of the war in Afghanistan. The President has relieved McChrystal of his duties, despite the disgraced general's previously pivotal role as commander of the Afghan theater of operations. The movie was shot by co-directors with a death wish Sebastian Junger (A Perfect Storm) and Tim Hetherington (The Devil Came on Horseback) who embedded themselves with a 15-man, U.S. military unit stationed at a remote outpost in the Korengal Valley from May 2007 to July 2008.
Chinook helicopter was the only way in or out of their godforsaken encampment which was located in Eastern Afghanistan near the border with Pakistan, a safe haven for terrorists. Thus, the region was teeming with Taliban who attacked the American camp on a daily basis from the 10,000 ft. high mountain peaks surrounding the GIs.
Among the soldiers in the platoon was medic Juan "Doc" Restrepo, who seemed almost giddy during an interview at the outset of their dangerous deployment. "We're going to war!" he's shown chirping almost gleefully. Sadly, Doc was the first to be killed by the enemy, and not long after their arrival. So, they renamed their makeshift fort Restrepo in honor of their fallen comrade, and the filmmakers followed suit in terms of the title of this graphic, super-realistic example of cinema verite'.
Tragically, Doc would not be the last to perish before the troops' tour of duty ended, and this gritty picture captures not only the sadness, but the fear gradually etched into the faces of the survivors as they days wore on. The fighting gets pretty fierce, with fire often being exchanged at distances close enough to look into the eyes of the enemy and to engage them in hand-to-hand combat.
Understandably, some of the exasperated Americans seemed a little spooked by the Taliban launching wave after wave of seemingly-suicidal zealots desperate to scalp the Yankee infidel. "I feel like a fish in a barrel," concedes Sergeant Brendan O'Byrne, in assessing their "sitting duck" predicament. But others, like hard-boiled Steiner, like the kill or be killed aspect of war, calling it "Fun!" adding, "You can't get a better high. It's like crack! Better than bungee jumping or skydiving!"
Such bravado, however, tends to be tempered by sobering moments such as the insomniac who admits to taking five types of sleeping pills. Worse is when Riegel, considered by everybody to be the best soldier in the group, gets his head blown off in the midst of a battle royal. Without pausing to grieve, the guys continue to take it to the Taliban until that all-out attack is finally repelled. "We're going to die here," one worried grunt then grunts.
Not so. By the time the year was over, it was clear as they disassembled the bivouac to evacuate that everybody left at Restrepo was by then a hardened vet with the proverbial 1,000 yard stare. Hey, even if the U.S. never conquers the country, this movie makes it clear that the prospect of being outnumbered 10-to-1 can turn any kid with a sense of self-preservation into a fine-tuned killing machine.
Easily, the best documentary on the War in Afghanistan yet.

Watch the trailer for Restrepo: