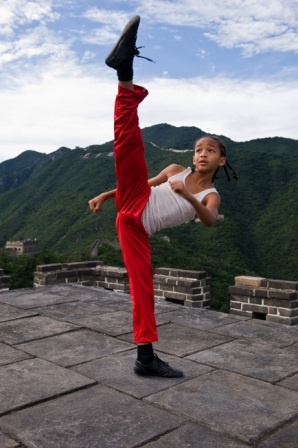 Hollywood is in the midst of a full-blown revival of Eighties classics, and the latest beneficiary of that sense of nostalgia is The Karate Kid. The 1984 martial arts hit was a modestly-budgeted revenge flick about a 98-pound weakling who gets bullied by classmates after he and his mom relocate to California.
But the newcomer is soon befriended by his apartment building's Japanese janitor, who teaches the boy karate by putting him on an unorthodox training regimen that's doesn't involve any fighting.
Other than the setting shifting to China where the events unfold on a much grander scale, the 2010 edition of the film is a fairly-faithful rendition of the original production. The picture was directed by Holland's Harald Zwart ("The Pink Panther 2") and co-stars Jackie Chan and Jaden Smith whose combination of charming badinage and acrobatic stunt work add up to a cinematic experience every bit as satisfying as the first.
The story opens in Detroit where 12 year-old Dre Parker (Smith) is saying his good-byes to pals before boarding a plane with his widowed mom (Taraji P. Henson) who has just taken a job in a Beijing automobile factory. Popular Dre dreads moving to a country where he doesn't know anybody and can't even speak the language.
Upon their arrival, he makes acquaintances with an American neighbor (Luke Carberry) who suggests they go down to the park to play some basketball. There, Dre falls in love at first sight with a cute local girl (Wenwen Han) practicing her violin on the bench. So, he saunters over to flirt with Meiying, who is very receptive to his advances and asks if she can touch his cornrows.
Their cross-cultural chemistry is not lost on an overprotective friend of her family, Cheng (Zhenwei Wang), who uses Kung Fu to give Dre a black eye while issuing the warning, "Just stay away from us, all of us!" Cheng and his posse attend the same school where Dre is about to enroll, and they proceed to turn Dre's life into a living hell.
Enter Mr. Miyagi, I mean Mr. Han (Chan), the Parkers' compassionate custodian. He miraculously heals Dre's wounds with an ancient remedy and offers to teach the lad to defend himself, Asian-style. Han then negotiates a truce with Dre's tormentors, buying time by promising to enter his protégé in the upcoming Kung Fu competition. Okay, cue the taskmaster's offbeat teaching methods that whip the kid into a black belt.
Does any of this sound familiar? It should. A note for note remake which magically manages to make you cry at all the same emotional push points as the original.

See a trailer for The Karate Kid