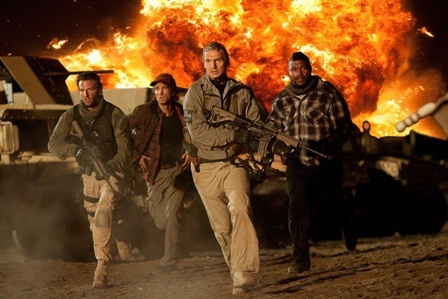 The A-Team (PG-13 for profanity, smoking, and pervasive action violence) Screen adaptation of the pyrotechnics-driven TV series from the Eighties chronicling the exploits of a squad of former Special Service soldiers determined to clear their names after unfairly being branded war criminals. With Liam Neeson as Hannibal, Bradley Cooper as Face, Sharlto Copley as Murdock and Quinton Jackson as B.A. Baracus.

The Karate Kid (PG for bullying, violence and mild epithets) Jaden Smith and Jackie Chan co-star in this Beijing-based remake of the 1984 screen classic about a 12 year-old newcomer to China being bullied at school whose unassuming janitor agrees to help him master the martial arts so long as he promises not to question the seemingly-unorthodox training regimen. With Taraji P. Henson, Tess Liu and Harry Van Gorkum.

Coco Chanel & Igor Stravinsky (R for graphic sexuality and nudity) Romance drama, set in Paris in the Twenties, abut the scandalous affair conducted by a famous French clothes designer (Anna Mouglalis) with the promising classical composer (Mads Mikkelsen) whose penniless, refugee family she let live in her villa after they escaped the Russian Revolution. (In French, Russian and English with subtitles)

Joan Rivers: A Piece of Work (R for profanity and sexual humor) Revealing bio-pic chronicling a year in the life of the legendary comedienne/elective plastic surgery devotee. With appearances by daughter Melissa, Don Rickles and Kathy Griffin.

Kings of the Evening (PG for mature themes, violence, smoking and mild epithets) Depression Era drama about a recently-paroled ex-con's (Tyson Beckford) attempt to earn a little cash and respect in the 'hood after two years in a chain gang by competing in a weekly fashion show with a grand prize of five dollars. Cast includes Lynn Whitfield, Glynn Turman and Bruce McGill.

The Lottery (Unrated) "Ticket out of the ghetto" documentary follows the diverging fortunes of four NYC families who feel their children's prospects in life depend on whether or not their names are drawn in the lottery admitting students to a phenomenally-successful, Harlem charter school. With appearances by Eva Moskowitz, Geoffrey Canada, Cory Booker, Susan Taylor and Joel Klein.

Winter's Bone (R for profanity, drug use and violence) Dysfunctional family drama, set in the Ozarks, about a spunky 17 year-old's (Jennifer Lawrence) perilous trek through the Ozark Mountains in search of her meth-dealing father who has jumped bail after putting up their house as collateral. Cast includes John Hawkes, Garret Dillahunt and Shelley Waggener.