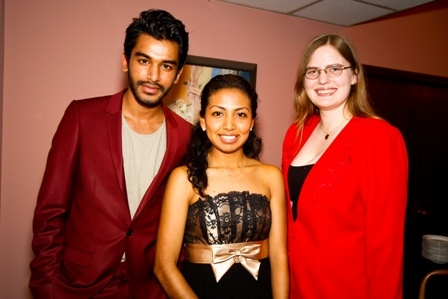 Nowadays, more students drop out than graduate from inner-city public high schools all across the country, so it's no surprise to learn the U.S. lags behinds so many other industrialized nations in terms of literacy and overall academic achievement. You don't really have to hear the statistics to get the sense that the American educational system is in a state of shambles. Recent news reports about teenagers gang-raping a 7 year-old in Trenton and about 40 gang-related shootings in Chicago over the course of just one weekend leave you with the feeling that all hope might be lost when it comes to this generation.
That's because the uplifting success stories never seem to enjoy equal time, which is what makes "Whiz Kids" such a welcome breath of fresh air. Directed by Tom Shepard, this inspirational documentary chronicles the exploits as well as the daily lives of a trio of 17 year-old aspiring researchers competing for the $100,000 Grand Prize awarded by Intel's Science Talent Search, the nation's most prestigious competition of its kind.
Each of these ambitious eggheads hails from a modest background, so they want to win the competition not only for the honor but to help defray the cost of their impending college educations. Shot during their junior and senior years of high school, this touching triskelion paints intimate portraits of adolescents so likable that it makes it impossible to pick out one to root for.
Born in Pakistan, Harmain Khan and his four siblings were raised in New York City by a welfare-mom who had to rely on food stamps and public assistance after the family was abandoned by her husband. Still, Harmain developed an avid interest in paleontology at an early age, and as a teen started conducting some groundbreaking fossil dating at a college willing to share its state-of-the-art facilities.
Ana Cisneros' parents were born in Ecuador and only speak broken English, so what she's managed to accomplish is also nothing short of amazing. In a basement lab built by her dad, Ana's embarked upon some fascinating genetic experiments in which she successfully trained plant roots to grow straight down rather than spread horizontally.
Finally, we have West Virginia's Keydra Welcker, whose project turns out to be the most timely, given the ecological disaster presently unfolding in the Gulf of Mexico. Outraged by her father's former employer DuPont's polluting of the nearby Ohio River, this budding environmentalist invented a way to remove cancer-causing chemicals from the local water. And her early test results have been so encouraging that she's already applied for a patent on the process to boot.
Although director Shepard does a masterful job of winding the tension during the movie's inexorable march to the Science Talent Search finals staged in Washington, DC, all of the entrants were winners in my book regardless of the outcome. That undeniable fact is easily proven by the closing credits postscript which updates Harmain, Ana and Keydra's eventual choices of what college to attend.
A heartwarming bio-pic about three brilliant, young brainiacs guaranteed to restore your faith in America's future while bringing tears to your eyes.

See a trailer for Whiz Kids