Kam Williams Special to The Skanner News
Published: 28 May 2010 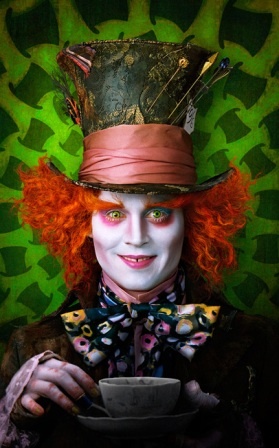 Charles Lutwidge Dodgson (1832-1898), aka Lewis Carroll, was the prolific author of numerous children's fantasies written in a surreal style known as literary nonsense. But he only wrote two books about his most popular character, Alice, namely, "Alice's Adventures in Wonderland" and its sequel, "Through the Looking Glass."
Since 1903, there have been over a dozen fairly-faithful screen adaptations of these beloved classics, but leave it to a cinematic maverick like Tim Burton to overhaul the once sacrosanct franchise. This reinterpretation revolves around a post-pubescent, 19 year-old rebel as opposed to the original's innocent, 7 year-old tyke with an insatiable curiosity and a vivid imagination.
The story is set in Victorian England where we find Alice (Mia Wasikowska) being raised like a refined lady by her recently-widowed mother. Alice Kingsleigh (Lindsay Duncan) is concerned about her strong-willed daughter's feminist tendencies, especially since the blossoming beauty has a well-heeled suitor in Hamish Ascot (Leo Bill). However, when the pompous aristocrat pops the question in a gazebo at a lawn party in front of hundreds of people, a flustered Alice asks her ardent admirer for a little time to think about the marriage proposal.
Then, she darts of into the woods where she falls down a rabbit hole only to be unceremoniously deposited in Underland, a vaguely-familiar, parallel universe she doesn't remember having visited a dozen years earlier. There, she is soon reintroduced to the colorful menagerie still inhabiting the magical kingdom, old friends including the White Rabbit (Michael Sheen), the Cheshire Cat (Steven Fry), Tweedledum and Tweedledee Matt Lucas) and, of course, the Mad Hatter (Johnny Depp), to name a few.
Seems that Alice has arrived in the midst of a crisis, and the motley crew enlists her assistance in ending the reign of terror of the evil Red Queen (Helena Bonham Carter) in favor of the relatively-benign sister she's rudely deposed, Mirana (Anne Hathaway). All that's involved is slaying the Jabberwocky (Christopher Lee), the dragon defending the Red Queen's castle.
Not surprisingly, Johnny Depp easily upstages the rest of the cast, here, between his affected, gap-toothed British accent and that natural flair for the dramatic. Throw in his zany costume, hyperthyroid eyes and frizzy hair ostensibly turned bright orange by an excess of mercury in the brim of his chapeau, and the talented thespian has fashioned yet another unforgettable character for the ages.
21st Century Alice matures and enters The Matrix!