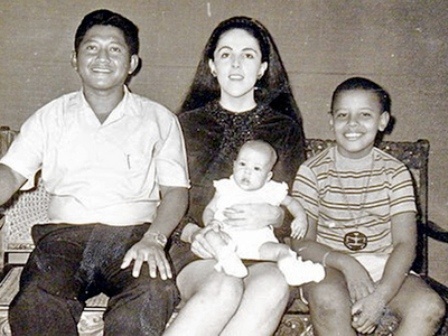 BANDUNG, Indonesia (AP) -- Young Barry Obama is struggling with his pingpong shot.
Or rather, 12-year-old Hasan Faruq Ali is struggling to play left-handed in imitation of the character he is portraying in a new Indonesian film, ``Little Obama.''
``Hasan has the walk, he has the posture of Barry,'' said Slamet Djanuadi, a consultant on the film and a childhood friend of President Barack Obama when he lived in Indonesia from 1967 to 1971.
``But Barry was a better pingpong player,'' he laughed, watching Hasan hit the ball off the table.

Obama, 9, with his mother Ann Dunham, his Indonesian step-father Lolo Soetoro, and his sister Maya Soetoro in Jakarta, Indonesia


The movie, produced by Multivision Plus, Indonesia's largest production company, will premiere in Indonesia on June 17, the week of Obama's anticipated visit to the country. The president postponed a planned visit in March to push through health care legislation.
The film tells the story of Obama's childhood in Jakarta, where he lived with his mother and Indonesian stepfather from age 6 to 10.
``It's about his friendships, his hobbies, just a childhood story,'' said screenwriter and co-director Damien Dematra. ``It's not about politics, it's just the story of a boy.''
Hasan, who was born in America in Questa, N.M., but has lived in Indonesia since he was about 2 years old, was an obvious casting choice to play the young Obama. Fluent in English and the Indonesian language, and the son of a White mother and African American father, Hasan fit the bill.
Improving his pingpong game was his focus during breaks on the fifth day of filming, earlier this week. Day four's challenge was boxing, a childhood pursuit the president has said he learned from his stepfather and one that Hasan, with three years of karate training, felt more comfortable with.
``It feels great to play Obama,'' the novice actor said with a grin. ``I was shy about it at first and there are some new difficulties that you have to work to get over, with intense practice, like this,'' -- gesturing toward the pingpong table on the lawn -- ``and just learning the lines, practicing the scenes.
``But then it became easy and fun, especially acting as a very important character who left here to become president,'' Hasan said.
The movie set is a colonial-era house on the outskirts of Bandung, a city famed for its colonial architecture amid lush hilltops about 110 miles (180 kilometers) southeast of Jakarta.
Directors John de Rantau and Dematra chose the city because it resembles Jakarta in the 1970s. Obama's old home in the Jakarta neighborhood of Menteng is now surrounded by tall apartment blocks and is too urban.
The movie is taken from Dematra's book ``Obama Anak Menteng'' -- ``Obama, the Menteng Kid'' -- a fictionalized biography based on interviews with about 30 old friends and neighbors. It is the first in a planned trilogy about Obama in Indonesia. The second book is to focus on his education at a Catholic school and the third on his relationship with his mother.
Dematra said he was a Hillary Rodham Clinton fan until he researched Obama.
``I just felt that this guy is an extraordinary person,'' Dematra said. ``The reason I'm doing this is I want people around the world to know that Obama can become who he is because of his background in Indonesia. The different religions and races, the pressures that he had. I want the film to inspire people.''
Two of Obama's old friends, Djanuadi and his brother, Yuniadi, whose family shared a house with Obama's, are coaching Hasan on everything from sports to Obama's relationship with his mother and stepfather.
``It takes us back to the past, teaching Hasan and remembering the games we played together, flying kites, Monopoly, puzzles,'' Djanuadi said. ``Barry would probably like this movie for the same reasons, to recall his memories.''
Hasan, the child actor, is not quite as chubby as Obama was, Djanuadi and his brother say, despite his efforts to grow into his character by eating extra meals and giving up karate practice.
Now in costume -- muddied shorts and T-shirt and a bandage around his leg from a playground scuffle the fictional Obama had -- Hasan waits for his next scene to be filmed, dribbling a soccer ball like a basketball and pretending to shoot at an imaginary basket.
``President!'' the director calls out, amid laughter, summoning Hasan to the living room for his next take. Over and over, for nearly an hour, he carries a soccer ball into the room, calling out for his parents before meeting them in the hallway and looking distressed upon seeing they've been arguing. Finally, after several takes, it's a wrap.
Shakur Ali, Hasan's father, watched from a window. He said the first time he watched Hasan act, it brought tears to his eyes.
``I was shocked to see the change, to see him become this person,'' said Ali, who doesn't follow U.S. politics and said it doesn't matter to him that his son is playing Obama but just that he is following his dream of being a performer.
Cara Lachelle, a South African-born actress, said she took her role as Obama's mother very seriously.
``His mom was so strong, she knew her son would be put through hardship and she helped him through that,'' Lachelle said. ``I am very careful about the way I portray her, to do justice to them both.''
Indonesian actor Eko Noah plays Lolo Soetoro, Obama's stepfather.
The directors hope to finish shooting on June 3 in time for its scheduled premiere. Everyone hopes Obama will watch it, including the directors, actors and the childhood neighbors he spent hours playing pingpong with.
As for Hasan, he said he carries two things from the movie: the inspiration to follow his dreams and Obama's smile.
``Before, I was a guy that kept to myself. But in acting, I'm trying to be like the guy in the pictures, who looks like he likes to be around friends and is always smiling,'' Hasan said. ``And now, even when I'm not acting, I can't help it but I definitely notice I smile a lot more.''