Opening This Week for Movies Opening May 14

Kam Williams Special to The Skanner
Published: 13 May 2010 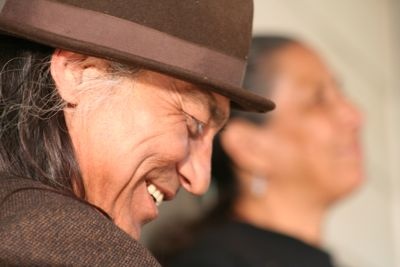 Just Wright (PG for brief profanity and suggestive material) Queen Latifah and Common co-star in this romantic comedy about a physical therapist who finds herself falling for the professional basketball player she's been hired to rehabilitate after a career-threatening knee injury. With Paula Patton, Phylicia Rashad, Pam Grier, and NBA Stars Dwight Howard, Dwayne Wade and Rashard Lewis.

Letters to Juliet (PG for crude humor, smoking and mild epithets) Romantic comedy about a recently-engaged American (Amanda Seyfried) vacationing with her preoccupied fiancé (Gael Garcia Bernal) in Verona, Italy where she encourages an elderly Englishwoman (Vanessa Redgrave) to look for the long-lost love she hasn't heard from in over half a century. Cast includes Daniel Baldock, Franco Nero and Lidia Biondi.

Robin Hood (PG-13 for sexuality and intense violence) Russell Crowe stars as the latest incarnation of the beloved, 13th C. legendary outlaw of English folklore who with his band of Merry Men rob from the rich to give to the poor. Directed by Ridley Scott, and featuring Cate Blanchett as Maid Marian, Mark Addy as Friar Tuck, Kevin Durand as Little John and Danny Huston as Richard the Lionhearted.

Barking Water (Unrated) Bittersweet road drama about a terminally-ill Native American (Richard Ray Whitman) whose is sprung from the hospital by his embittered ex-wife (Casey Camp-Horinek) for a death bed reconciliation with his estranged daughter (Zoe Ballentine) and the grandchild he's never met. With Jon Proudstar, Aaron Riggs and Marcus Frejo.

Best Worst Movie (Unrated) Two thumbs down documentary revisits the making of Troll 2, the 1990 horror flick generally credited as the worst movie ever made. Directed by the best-forgotten cult classic's star, Michael Stephenson, who reassembled practically the entire cast to deconstruct exactly where they went wrong.

Daddy Longlegs (Unrated) Redemption drama about a prematurely-graying workaholic (Ronald Bronstein) who decides to turn a new leaf by spending some quality time with his young sons (Sage and Frey Ranaldo) during their annual, two week custody stay in his cramped, NYC studio apartment. With Wayne Chin, Leah Goldhor and Leah Singer as his ex.

Entre Nos (Unrated) NYC tale of survival about a Colombian immigrant's (Paola Mendoza) desperate effort to provide for her two young children (Sebastian Villada Lopez and Laura Montana Cortez) after her husband (Andres Munar) abandons the family to movie to Miami alone. (In Spanish with subtitles)

Here and There (Unrated) Green Card comedy about a broke, NYC musician (David Thornton) who flies to Belgrade to marry a stranger (Jelena Mrdja) so she can immigrate to the United States only to find himself falling in love with another woman (Mirjana Karanovic) while waiting to get paid for participating in the sham. Supporting cast includes Cyndi Lauper, Antone Pagan and Max King. (In Serbo-Croatian and English)

The Living Wake (Unrated) Last day in the life comedy about an eccentric artist (Mike O'Connell) with less than 24 hours to live who with the help of a pal (Jesse Eisenberg) with a motorized rickshaw rides around town handing out invites to a party where he plans to drop dead at the end of the night. With Jim Gaffigan, Ann Dowd and Jill Larson.

Looking for Eric (Unrated) British farce, directed by Ken Loach, about a suicidal postman (Steve Evets) who escapes from his host of woes, including his mob-connected son (Gerard Kearns), by fantasizing about his favorite soccer star, Eric Cantona. Support cast includes Lucy-Jo Hudson, Stephanie Bishop and Stefan Gumbs. (In English and French with subtitles)

Princess Kaiulani (Unrated) Historical saga, set in 1888, starring Q'Orianka Kilcher in the title role as the 12 year-old Hawaiian heir whose family was overthrown while she was being educated in Victorian England where she fell in love with a local lad (Shaun Evans). With Will Patton, Barry Pepper and Tamzin Merchant. (In English and Hawaiian with subtitles)

Touching Home (PG-13 for profanity, smoking, drinking and brief profanity) Ed Harris stars in this true tale about a homeless alcoholic whose talented twin sons (Logan and Noah Miller) overcome their dysfunctional family life by growing up to become baseball prospects with the potential to make it to the pros. With Lee Meriwether, Brad Dourif and Robert Forster.