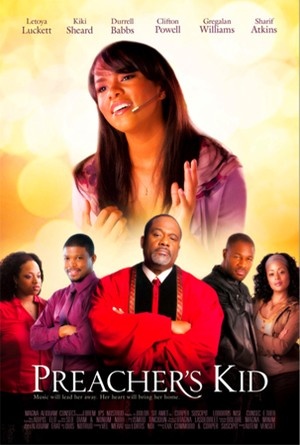 As the only child of an overprotective, widowed father, Angie King (Letoya Luckett) almost couldn't help but feel smothered. But when you factor in her dad's being both a preacher and a pillar of the community in their tight-knit Augusta, Georgia neighborhood, you've got a serious recipe for rebellion. Thus far, in"Preacher's Kid," the 23 year-old virgin has devoted herself to the needs of her asthmatic father, between singing in the choir and ministering to the needy.


However, everything changes the day Angie decides to run away not to join the circus but a Tyler Perry type travelling troupe passing through town, a supposedly spiritually-oriented outfit putting on a faith-based fable featuring Aunt Bebe, a trash-talking character played by a big dude (Carlos Davis) in a dress. For she develops an instant crush on the show's suave star, Devlin (Durrell Tank Babbs), a Romeo well versed in the art of seduction.
When informed of this, Bishop King (Gregalan Williams) disowns his daughter on the spot. Yet, she still leaves town with dreams of not only winning Devlin's heart but of landing a role in the theater group's next musical production.
Needless to say, a very rocky road lies ahead of Angie, starting with her failing her audition with an impatient director who calls her deaf, dumb and stupid. This makes her more dependent on devilish Devlin, who soon proves to be a two-timing, physically-abusive creep.
So, unfolds Preacher's Kid, a cautionary tale written and directed by Stan Foster. It's not very hard to anticipate the arc of this Christian-oriented message movie which tends to telegraph most of its punches. Nonetheless, it's well-enough executed, especially for a flick on a modest budget, to forgive the low production values and a tendency towards melodrama.
The payoff arrives after Prodigal Daughter Angie has learned some tough lessons and returns to ask her father for forgiveness, allowing for a moving moment of mutual redemption.

To order a copy of Preacher's Kid

To see a trailer for Preacher's Kid