Film Review: Death at a Funeral 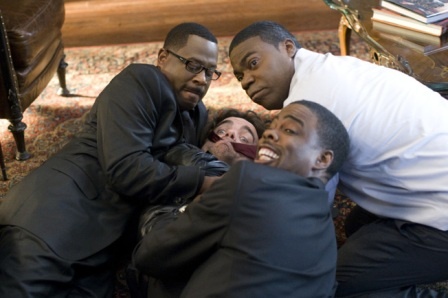 "Death at a Funeral" sounds like a classic case of a production that probably sounded like a "can't miss" when its assorted elements were being pitched to studio execs. First of all, it's a remake of a recent British hit which quintupled its $9 million budget at the box office.
The fact that the original was just released in 2007 wouldn't be a problem, theoretically, because they'd be going after a different demographic, as this version would feature a predominantly African American cast. Furthermore, not just any Black actors would be asked to execute this dark comedy, but a trio of A-list comedians in Chris Rock, Tracy Morgan and Martin Lawrence, plus a bevy of accomplished thespians like Keith David, Zoe Saldana, Danny Glover and Loretta Devine.
And the icing on the cake that got it greenlighted involved attaching art house crowd darling Neil LaBute to the project, the director of such critically-acclaimed indies as "In the Company of Men" and "Your Friends & Neighbors." Unfortunately, while all of the above must've looked great on the drawing board, this blackface variation on the theme adds up to far less than the sum of its parts.
Here's why. Rather than overhaul the screenplay to appeal to an African American sense of humor, LaBute opted to recycle one designed to tickle British fancies. Consequently, Messrs. Rock, Morgan and Lawrence seem almost shackled sticking to a script which allowed them little room to improvise or to horse around in their trademark styles.
Instead, what's served up here is a farce reminiscent of an extended episode of "Benny Hill," "Mr. Bean," "Fawlty Towers" or one of those other slapstick BBC-TV sitcoms. I know what you're thinking: that's pretty good company. Yeah, until you get a load of a bunch of Black folks attempting to behave in identical fashion.
Anyhow, "Death at a Funeral" revolves around a very eventful day in the lives of an extended family gathering to mourn the passing of a beloved patriarch. Edward (Frank Minor) is survived by his wife, Cynthia (Devine), siblings, Russell (Danny Glover) and Duncan (Ron Glass), and their assorted offspring.
The picture's everything but the kitchen sink plotline wastes little time to thicken, beginning with the arrival of a gay dwarf (Peter Dinklage) who demands a share of the inheritance as the deceased's ex-lover. Since the grieving widow had no idea her hubby was on the down-low, her protective sons (Rock and Martin) agree to try to hide the evidence from their mom. This, of course, proves easier said than done.
Then there's niece Elaine's (Saldana) jittery boyfriend Oscar (James Marsden) who's accidentally slipped several tabs of LSD from a vial marked "Valium," a running joke which is repeated with a couple of other guests. Eventually, Oscar pulls a Full Monty on the roof in front of all the open-mouthed mourners. Later, Uncle Russell pulls the same prank on the same roof under the influence of the same hallucinogen. A scene so hilarious you just had to shoot it twice, I guess. Everything comes to a head when you'll never guess who (actually, yes you will) dies unexpectedly and is hidden in the coffin in the 69 position with his late lover's corpse.
For me, the basic test of a comedy is how often it made me laugh out loud. This one? Not at all, not even the sight of Tracy Morgan with feces smeared all over his face. I suppose the best that can be said about this movie is that none of these terribly foulmouthed characters ever resorts to the N-word, although that's ostensibly only because they had to recite their lines verbatim.
What will creatively-bankrupt Hollywood think of next? How about a remake of "Slumdog Millionaire," only set in an L.A. barrio with an all-Chicano cast? I shouldn't give them any ideas.

To see a trailer for "Death at a Funeral," visit:
http://www.youtube.com/watch?v=HI8gmdVEIkQ