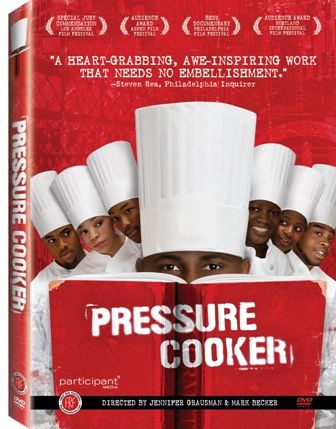 Philadelphia public schoolteacher Wilma Stephenson is a throwback who reminds me of one of those no-nonsense nuns I feared in grammar school. For, this strict disciplinarian is a veteran with almost 40 years of experience who brings that same rare combination of dedication, know-how and high expectations to her classroom on a daily basis. Consequently, her students dare not show up late or unprepared, or cut-up, step out of line or fail to focus on the task at hand out of fear of incurring the wrath of this ever-vigilant taskmaster. But it is important to understand that her dead serious approach to education comes out of love and wanting to maximize the potential of each and every one of her pupils.
Stephenson teaches Culinary Arts at Frankford High to underprivileged kids whose only avenue for making it out of the ghetto lies in landing a scholarship to an institution of higher learning. So, she does her best to turn those willing to apply themselves into gourmet chefs by the time that graduation day rolls around.
And because she knows that none of her students parents' can afford the cost of college tuition, she also gets personally involved in helping them understand the ins-and-outs of the scholarship application process. In fact, Wilma proudly points out that 11 members of last year's cooking class landed three-quarters of a million dollars in financial aid.
But here, she and her current crop of promising students are the subjects of Pressure Cooker, a riveting, inspiring, heartrending and ultimately triumphant documentary which left me in tears. The film focuses narrowly on the fates of three aspiring chefs inspired to dare to dream big during their senior year despite hailing from humble origins.
Each of the trio has a sadder story than the next. First, we meet fatherless Tyree Dudley, whose single-mom has her hands full between work and caring for him and his sister. Then there's Fatoumata Dembele, who only arrived in America from French-speaking Mali four years ago. Not only is she struggling to adapt to a new language and culture, but she is being raised by her single-dad. Finally, we have Erica Gaither who was abandoned by her mother. And because her father is overburdened by his job, she has to care for her legally-blind, little sister.
Over the course of Pressure Cooker, we watch as Wilma Stephenson sensitively dons whatever approach might be appropriate at the moment. She may be nails during the class hour, but once the bell rings she can quickly turn into a surrogate mother, mentor, psychologist, shoulder to lean on, guidance counselor or even matchmaker for a couple of wallflowers without a date to the prom.
Again and again, Stephenson goes above and beyond the call of duty, determined to keep the kids focused on earning their ticket out of the 'hood, that full scholarship to the culinary institute of their choice. And by the time the film's critical moment arrives when they are all finally about to learn their individual fates, the palpable tension in the auditorium's air is etched in the faces of the proud teacher and her understandably anguished students alike. Don't be surprised to find yourself sitting on the edge of your seat and welling up while rooting for these endearing underdogs as well.
A fitting tribute to a selfless role model with an big heart and an indomitable spirit. Let's face it, they don't make 'em like Wilma Stephenson anymore.

To see a trailer for Pressure Cooker, visit:
http://www.nonsequiturproductions.com/pressure_cooker.html