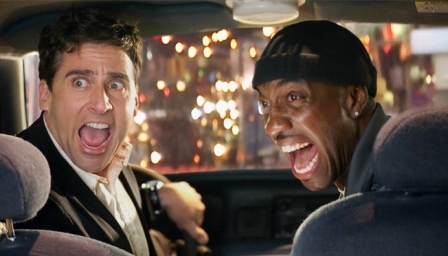 The Black Waters of Echo's Pond (R for gore, graphic violence, profanity, drug use, nudity and sexuality) High attrition-rate horror flick featuring nine friends whose dream vacation in a Victorian mansion on a remote island turns ghastly when they decide to play an ancient game they find buried in the sand. Ensemble includes Robert Patrick, Danielle Harris, Walker Howard and the Avellan twins.

Date Night (PG-13 for profanity, sexuality, violence, a drug reference and pervasive crude humor) Steve Carell and Tina Fey co-star in this screwball comedy as a jaded suburban couple from Jersey who decide to spice up their marriage by having dinner together in a fancy Manhattan restaurant only to end up on the run from mobsters and cops when they are mistaken for wanted con artists. Star-studded supporting cast includes Mark Wahlberg, Taraji P. Henson, James Franco, Common, Kristen Wiig, Mark Ruffalo, Mila Kunis and Will.i.Am.

After.Life (R for profanity, nudity, disturbing images and brief sexuality) Psychological thriller about a car accident victim (Christina Ricci) who comes out of a coma to find herself in a funeral parlor where a mortician (Liam Neeson) with a sick agenda persists in prematurely preparing her body for burial. Hope for rescue rests with her skeptical boyfriend (Justin Long) who urges the police chief (Josh Charles) to investigate.

Everyone Else (Unrated) Romance drama about a bohemian rock publicist (Birgit Minichmayr) and a more conventional architect (Lars Eidinger) whose solid relationship starts to go sour after they accept an invitation to spend a day aboard the yacht of a married couple (Hans-Jochen Wagner and Nicole Marischka) they meet while vacationing on the Mediterranean Island of Sardinia. (In German and Italian with subtitles)

The Good, the Bad and the Weird (Unrated) Sprawling spoof of the Clint Eastwood classic, a wacky Western set in Manchuria in the 1940s where we find three outlaws (Byung-hun Lee, Kang-ho Song and Woo-sung Jung) being chased by both the Japanese army and Chinese bandits while in a race to find a map leading to a priceless, buried treasure. (In Korean, Mandarin and Japanese with subtitles)

It Came from Kuchar (Unrated) Bio-pic recounting the enduring career of twins George and Mike Kuchar, legendary, low-budget filmmakers from the Bronx who got their start in the Fifties shooting movies in the backyard with an 8mm camera they borrowed from their Aunt.

Letters to God (PG for mature themes) Bittersweet, faith-based drama, inspired by the true story of a cancer-stricken young boy (Tanner Maguire) who touched the lives of everyone who crossed his path, especially the beleaguered postman (Jeffrey Johnson) asked to deliver his hand-written prayers to the Lord. With Robin Lively, Bailee Madison and Ralph Waite.

The Misfortunates (Unrated) Coming-of-age drama adapted from the Dimitri Verhulst novel about a 13 year-old, Dutch boy (Kenneth Vanbaeden) being raised at grandma's (Gilda de Bal) house by his alcoholic father (Koen de Graeve) and three party animal uncles (Wouter Hendrickcx, Johan Heldenbergh and Bert Haelvort) after his exasperated mother walked out on the family. (In Dutch with subtitles)

La Mission (R for profanity, violence and sexuality) Father-son drama, set in the barrio in San Francisco, about a macho, recently-widowed, alcoholic parolee (Benjamin Bratt) who finds himself tested on the road to redemption when he discovers that the son (Jeremy Ray Valdez) he's now raising alone is gay. With Tina Huang, Melvina Jones and Max Rosenak.

The Square (R for violence and profanity) Aussie crime thriller, set in Sydney, about a guy (David Roberts) stuck in a loveless marriage whose life comes apart at the seams when he decides to run away with his mistress (Claire van der Boom) after she shows up with a bag containing a small fortune of ill-gotten cash. With Joel Edgerton and Anthony Hayes.

When You're Strange (R for sexuality, nudity, profanity and drug references) Johnny Depp narrates this rockumentary recounting the meteoric rise and just as fast fall of The Doors, a talented quartet whose premature demise was hastened by the untimely death of its charismatic lead singer, Jim Morrison.

Who Do You Love? (Unrated) Yet another bio-pic chronicling the cultural contributions of Leonard Chess (Alessandro Nivola), co-founder with his brother Phil (Jon Abrahams) of the legendary record label which bore their name. With Chi McBride as Willie Dixon, Keb Mo' as Jimmy Rogers, David Oyelowo as Muddy Waters, Robert Randolph as Bo Diddley and Miko DeFoor as Little Walter.