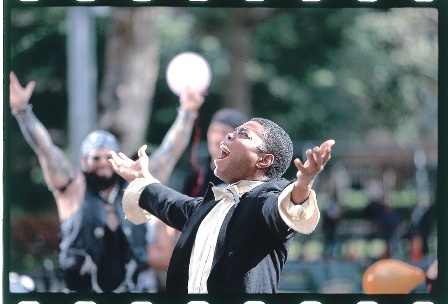 It's not a good sign when a film is released on DVD only a month after opening in theaters, especially when the picture was made over a decade ago and took forever to find a distributor. But this is exactly what we have in the case of Harlem Aria, an abomination marking the ignominious directorial debut of William Jennings.
At the point of departure we're introduced to Anton (Gabriel Casseus), a mildly-retarded 28 year-old reminiscent of that title character Cuba Gooding played in Radio. The difference here is that this idiot savant is blessed with a love of opera and a great singing voice.
Unfortunately, the prospects aren't exactly brilliant for Anton, given that he's stuck working in a dead-end job at a laundromat. Plus, he lives with his overprotective aunt (Eyde Byrde) because his gullibility and generosity make him easy prey for the unsavory vultures prowling around his Harlem neighborhood.
Everything changes the day he decides to run away from home to pursue his passion and ends up in Greenwich Village where he forges an unlikely friendship with homeless Wes (Damon Wayans), one of those bad things that happens to good people. The fast-talking street hustler introduces his mark to Matthew (Christian Camargo), a classical pianist playing requests for passersby in Washington Square Park. Soon, Anton and Matthew are performing together, with conniving Wes serving as their manager and collecting tips for the suddenly popular panhandling duo.
Don't be fooled by Harlem Aria's promising premise or syrupy sweet resolution, since the problems with the production betwixt and between are plentiful, starting with Wayans' portrayal of Wes as a jive and relentlessly-crass creep. From his use of the n-word (like "Niggerati" in lieu of the black Pavarotti) to his homophobic asides (ala "You look like a gay Ninja Turtle") his lines are more apt to offend than to induce laughter.
And I wasn't sure what to make of half of his ostensibly improvised non-sequiturs, such as "My d*ck is bigger than your d*ck, and I'm going to hit you with it if you don't shut the f*ck up." Co-star Gabriel Casseus' interpretation of Anton was equally troubling, given that here's a half-wit who seemingly can't even boil water yet he somehow magically morphs into a talented tenor capable of crooning all the classic operas in their native languages perfectly, simply by donning a tuxedo replete with tails.
A crude coon show that relies on lines delivered in African-American cadence for comic relief. 100 minutes of Hell that had me reaching for my meds.

To see a trailer for Harlem Aria, visit:
http://www.youtube.com/watch?v=a-AUhze9CHM