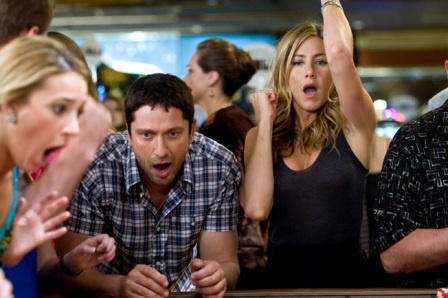 The Bounty Hunter (PG-13 for profanity, violence and sexuality) Romantic comedy about a down-on-his-luck bounty hunter (Gerard Butler) hired to bring his bail-jumping ex-wife (Jennifer Aniston) to justice for a minor legal infraction who ends up on the run with her when they both become embroiled in the murder case she's been investigating. With Christine Baranski, Jeff Garlin, Jason Sudeikis and Dorian Missick.

Repo Men (R for profanity, graphic violence, grisly images, sexuality and nudity) Sci-fi thriller, set in the near future, about an ex-collections enforcer (Jude Law) who fell behind on payments on an artificial heart who finds himself on the run from another repossession man (Forest Whitaker) ready to rip the life-saving device right out of his chest. Ensemble includes Live Schreiber, Carice van Houten, Alice Braga and rapper RZA.

The Runaways (R for profanity, sexuality and drug use) Kristen Stewart stars as Joan Jett in this coming-of-age bio-pic about the meteoric rise to fame in 1975 and burnout by 1977 of her all-girl rock and roll quintet comprised of attractive 15 year-olds. Co-starring Dakota Fanning as Cherie Currie and Scout Taylor-Compton as Lita Ford, and with Tatum O'Neal and Michael Shannon.

Season of the Witch (PG-13 for violence, mature themes and disturbing elements) Nicolas Cage and Ron Perlman star in this medieval adventure about a couple of knights assigned by the Church to escort a witch (Claire Foy) suspected of spreading the plague to a remote monastery where priests plan to perform an exorcism on her. With Christopher Lee, Stephen Campbell Moore and Robert Sheehan.

City Island (PG-13 for sexuality, smoking and profanity) Kitchen sink sitcom about a wacky Italian-American family with a lot of skeletons in the closet, from a patriarch (Andy Garcia) who's secretly taking acting lessons, to a Prodigal Son (Steven Strait) who's an ex-con, to a daughter (Dominik Garcia-Lorido) who's working as a stripper, to a teenager (Ezra Miller) who's a chubby chaser, to his sexually-frustrated wife (Julianna Margulies). Support cast includes Emily Mortimer and Alan Arkin.

The Girl with the Dragon Tattoo (Unrated) Screen adaptation of Stieg Larsson's best seller of the same name about a journalist-turned-amateur sleuth (Michael Nyqvist) who, with the help of a rebellious, young computer hacker (Noomi Rapace), tries to solve the mysterious disappearance of a teen heiress which transpired forty years earlier. (In Swedish with subtitles)

Greenberg (R for profanity, drug use and graphic sexuality) Ben Stiller stars in the title role of this poignant romance drama about the attempt of two lost souls, adrift in L.A., to forge a meaningful connection. With Jennifer Jason Leigh, Greta Gerwig, Juno Temple, Rhys Ifans and Chris Messina.

Kimjongilia (Unrated) Red Curtain documentary in which refugees of North Korean prison camps share their horror stories about the political repression, famine and general devastation they left behind when they escaped from their Communist homeland. (In English and Korean with subtitles)

Mid-August Lunch (Unrated) Dysfunctional family comedy, set in Rome over the Assumption holiday weekend, revolving around a cash-strapped, alcoholic, middle-aged bachelor (Gianni Di Gregorio) still living at home where he devotedly attends to the demands of his widowed, 93 year-old mom (Valeria De Franciscis) and three other elderly ladies he's preparing a feast for. (In Italian with subtitles)

Shutterbug (Unrated) Supernatural romance drama about a jaded photographer (Nando Del Castillo) who sets off on odyssey in search of the beautiful apparition burnt into his vision while shooting a sunrise. With Doug Barron, Anna Gutto and Brian Ish.

Vincere (Unrated) WWII saga about the love child spawned in 1922 by the illicit liaison of Benito Mussolini (Filippo Timi) and his secret mistress, Ida Dalser (Giovanna Mezzogiorno), which was consummated before the Fascist dictator's rise to power. (In Italian and German with subtitles)