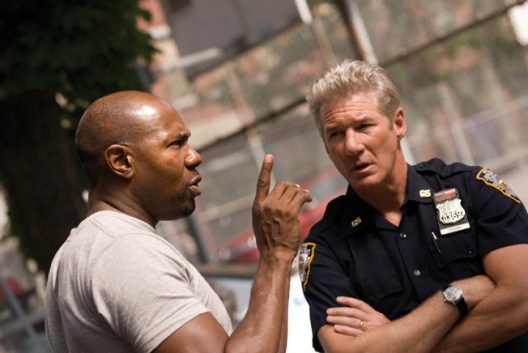 In recent years, Boston has provided the backdrop for a number of gritty crime capers set in tight-knit communities, intimate character-driven dramas such as Mystic River (2003), The Departed (2006), Gone Baby Gone (2007) and What Doesn't Kill You (2008). By comparison, New York contributions to the genre tend to more action-oriented and revolve around crooked cops rather than folks from the 'hood. Just think of 16 Blocks (2006), Righteous Kill (2008) and Pride and Glory (2008).
The latest contribution to the latter category is Brooklyn's Finest, a gruesome splatter flick from Antoine Fuqua, who directed Training Day (2001), the similarly-graphic, Los Angeles saga which landed an Academy Award for Denzel Washington. Though unfolding on the East coast, this film trades in the same sort of profanity, ethnic slurs and gratuitously-violent fare in service of high attrition-rate fare designed for the blood sport demo.
What makes Brooklyn's Finest unique are its three discrete plotlines deftly interwoven by first-time screenwriter Michael Martin into a delightful braid with a nicely-engaging narrative. And the strands of the taut triskelion remain fairly insulated until the exciting conclusion where the protagonists' paths finally cross.
One plait of the cinematic cornrow examines the escalating misfortunes both on the job and at home of Sal Procida (Ethan Hawke), a police officer corrupted not so much by greed as by a need to provide for his growing family on a cop's salary. His house is not only too small for four kids, but his asthmatic wife (Lily Taylor) is pregnant again, and with twins to boot.
Furthermore, her obstetrician is warning that she might lose one of the babies, if she continues to live in a structure infected with toxic mold. So, can you really blame Sal for thinking about confiscating cash from drug dealers, especially since, like a good Catholic, he confesses his sins to Father Scarpitta (Bruce MacVittie) religiously?
The second story focuses on the equally-desperate plight of Tango Butler (Don Cheadle) a detective who is so deep undercover that it's taken a toll on his personal life. He begs his boss (Will Patton) for a desk job, but is referred to FBI Agent Smith (Ellen Barkin), a racist who makes that reassignment contingent on his first setting up Casanova Phillips (Wesley Snipes), an ex-con who's recently returned to the streets after serving eight years in a Federal prison. But because Caz once saved his life, Tang is very reluctant to entrap the former friend.
Finally, there's Eddie Dugan (Richard Gere), a jaded alcoholic just a week away from retirement. He's become so blasé he won't even bother to arrest a perpetrator unless the crime is being committed in his precinct. Separated from his wife, Eddie has been investing emotionally in Chantel (Shannon Kane), the proverbial prostitute with a heart of gold and man-pleasing lips. The tension in this unseemly scenario is wound around the question of whether Chantel is willing to let Eddie make an honest woman out of her when he moves to Connecticut.
Eventually, all roads in this cleverly-concealed, triangulated tale serendipitously lead to some godforsaken projects in Brownsville where live ammo is routinely employed as the ghetto equivalent of a calling card. Bloody beyond compare, but definitely riveting for the duration provided you're willing to duck a few bullets. What more can you ask of a multi-layered mystery?
An amoral morality play delivering the sobering message that crime does not pay, not even for dirty cops.

To see a trailer for Brooklyn's Finest, visit: http://www.youtube.com/watch?v=HUMC8rh6uuE