Film Review: Lord, Save Us from Your Followers 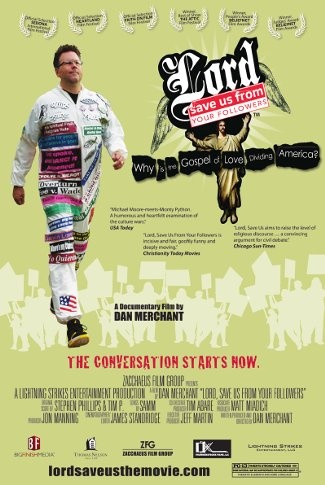 How is it that Christianity has come to be so closely associated with the Religious Right and conservative political causes? This is the fundamental question being asked by director Dan Merchant in "Lord, Save Us from Your Followers," an alternately humorous and sobering look at how far the practice of Christianity has deviated from the teachings of Jesus.
"You can tell you've created God in your own image," suggests one of his interviewees, author/activist Anne Lamott, "when it turns out God hates all the same people you do." Her tongue in cheek assessment of the state of religion in the U.S. reflects the perspective shared by Mr. Merchant, who proves himself something of a Michael Moore here, as he perambulates the country, microphone in hand, deliberately provoking outrage amidst an array of self-righteous Bible Thumpers.
But his goal, ostensibly, is not to generate controversy for controversy's sake, but to raise the consciousness of what he sees as a well-meaning, if narrow-minded Christian community. For again and again, he asks worshippers whether their Lord and Savior Jesus Christ would be as intolerant of gays and other groups that the Born Again demographic seems so dead set against.
Dan thinks Christ would be appalled by what has evolved in His name, since "We're raising consumers, not people committed to the mission of God in the world." Still, by the end of his peripatetic project, he is heartened by a charity in Oregon where volunteers not only help feed the homeless, but even wash their feet as well. "If this outpouring of love can happen in the least religious state, then I have hope," he concludes.
An extraordinarily-insightful endeavor urging Evangelicals to examine their own morality in relation to Jesus' words instead of conveniently pointing fingers at folks they've long since dismissed as heathens.

To see a trailer for Lord, Save Us from Your Followers, visit:
http://www.youtube.com/watch?v=qJRvUtL2H58