DVD Review: 'I Can Do Bad All by Myself' 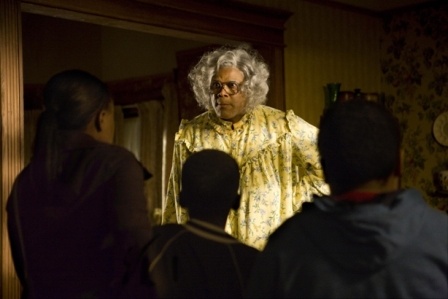 "I Can Do Bad All by Myself" is the sixth Tyler Perry play to be adapted to the big screen. Much like his previous productions, this faith-based message movie was crafted with an African American audience in mind, between all the down-home humor and earnest moralizing around universal themes particularly of relevance to the black community.
What's new is that the familiar formula has been enhanced by some stellar singing performances courtesy of support characters, all capably played by Gladys Knight, Mary J. Blige and Marvin Winans. As soulful a diversion as these pop icons periodically provide, there's still no mistaking the fact that the picture remains more of a melodrama than a musical. For its most memorable moments are reserved for Perry who's back in drag, camping it up as Madea, the wisecracking, pistol-packing granny who is at her best when talking trash and taking the law into her own hands.
At the point of departure, she catches three kids in the act of burglarizing her home, 16 year-old Jennifer (Hope Olaide Wilson) and her two younger brothers. But when she interrogates the "chirrun," she soon realizes that she's not dealing with juvenile delinquents but with desperate, destitute orphans whose crackhead mother is dead and who have now ostensibly been abandoned by their grandmother (Gretas Glenn) to boot. So, instead of calling the cops, Madea decides to turn the trio over to their only other living relative.
But estranged Aunt April (Taraji P. Henson) is very unsympathetic and only reluctantly takes her sister's offspring in. After all, she's an alcoholic stuck in denial in an abusive relationship with a domineering married man (Brian J. White). So, it's no surprise when she proves to be inept as a surrogate parent, misbehaving by chain-smoking in the same room as asthmatic Manny (Kwesi Boakye), by teasing chubby Byron (Frederick Siglar) about his weight and by failing to protect Jennifer from a sexual predator.
Fortunately, there ARE a few legit role models in April's life, and her repeated failings give each an ample opportunity to come to the rescue. Fellow saloon singer Tanya (Blige), Pastor Brian (Winans) and his God-fearing, wife Wilma (Knight) belt out meaningful ballads while April's handsome Colombian tenant (Adam Rodriguez) comes in handy with the child-rearing and when it's time to belt her creepy boyfriend around. Of course, there's Madea waiting in the wings to ensure that she finally wises up and makes the most of her last shot at redemption.
A pleasant, if predictable morality play offering a litany of teachable moments certain to resonate with the Born Again demographic.

To see a trailer for I Can Do Bad All by Myself, visit:
http://www.apple.com/trailers/lions_gate/icandobadallbymyself/large.html