Film Review: 'Up in the Air' 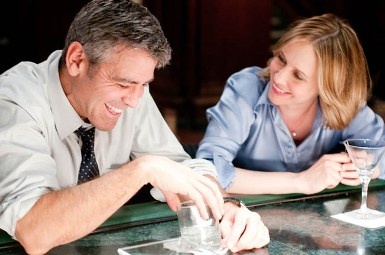 Ryan Bingham's (George Clooney) services have been very much in demand during these dire economic times marked by downsizing and the outsourcing of jobs overseas. Although he euphemistically refers to his line of work as career transition counseling, what he actually does for a living is fire people for companies that don't have the guts to terminate their own employees. In this capacity, the heartless hatchet man finds himself on the road, or should I say "up in the air" over 300 days a year, crisscrossing the country on assignments as dictated by his boss, Craig (Jason Bateman), from corporate headquarters in Omaha, Neb.
However, all the incessant travel is to rudderless Ryan's liking. After all, the confirmed bachelor isn't in a relationship, and he admittedly feels more at home in hotels and on planes than in the tiny apartment he very rarely uses. Furthermore, he puts little stock in worldly possessions beyond an obsession with racking up frequent-flyer miles in order to enjoy the conveniences which flow from upgrades in car rentals, credit cards, and first-class accommodations.
Everything changes for Ryan the day he trades pleasantries with Alex (Vera Farmiga), a kindred spirit he encounters in an airport lounge. For, as it turns out, the striking businesswoman is ostensibly also a peripatetic loner living out of suitcases and equally-fixated on accumulating travel perks. Their ensuing, alcohol-fueled flirtation leads to an impulsive one-night stand, plus plans for further passionate rendezvous whenever their hectic itineraries intersect.
Their star-crossed romance rests at the heart of "Up in the Air," the latest offering from Jason Reitman. The film is only loosely based on the identically-titled Walter Kirn best seller which doesn't really revolve around any steamy affair. The film also introduces a totally new character not in the novel, Natalie (Anna Kendrick). She's Ryan's recently-hired colleague who comes up with the bright idea of their firing folks via video conferencing. If her idea is adopted by their boss, it will put an abrupt end not only to Ryan's field trips but to his budding romance with Alex.
Although this inspired, mile-high sitcom is a delightful romp, it is likely to prove to be a bit of a disappointment for Reitman fans measuring it against either "Juno" or "Thank You for Smoking," which earned the #1 spot on this critic's Top 10 List of 2006. While Clooney and Farmiga are up to the challenge of generating screen chemistry and of exchanging the writer/director's trademark pithy banter, Anna Kendrick often comes across as unsure of herself, and thus fails to deliver her lines with the requisite terminally-hip tone.
Fortunately, the rest of the support cast, from J.K. Simmons to Sam Elliott to Danny McBride to Zach Galifianakis, executes its dialogue with perfect aplomb, enabling "Up in the Air" to serve up a down-to-earth look at 21st century dating habits in this no-strings age of friends with benefits.

To see a trailer for "Up in the Air," visit: http://www.youtube.com/watch?v=ok5PawKpvTI