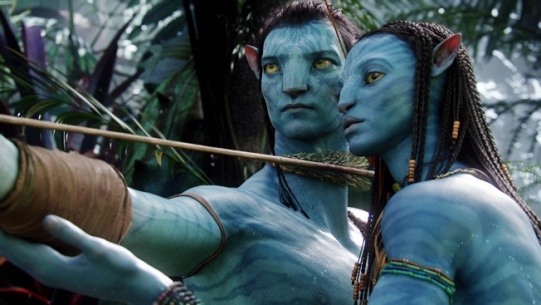 James Cameron wrote the script for "Avatar" back in 1994, but was unable to turn his vision into a movie until now because he had to wait for technological innovations to catch up to his expectations of the 3-D spectacular. As it turns out, the delay was well worth the wait, for this intergalactic sci-fi flick more than measures up to the hype, and not merely in terms of its introduction of the next generation of special effects.
The eagerly-anticipated adventure revolves around a socially-relevant story so thoroughly compelling that its nearly 3-hour running time flies by in a flash. Furthermore, this cautionary tale about the dangers of unchecked military might and corporate greed also features a tenderhearted cross-species romance.
The action unfolds in the year 2154 on the distant planet Pandora which is in the process of being invaded by SecFor (as in Security Force, get it?), a U.S. military-industrial complex/corporate conglomerate with designs on a rare mineral called unobtainium (as in not obtainable, get it?). The precious substance, worth $20 million a kilo, is the only reason for the expedition, as it apparently is the critical element involved in bringing presently-polluted Earth back from the brink of ecological extinction.
The picture's unlikely protagonist is paraplegic Jake Sully (Sam Worthington), an ex-Marine who has greatness thrust upon him when he volunteers to serve as a last-light year replacement for his recently-deceased twin brother in the Avatar program. Upon his arrival on Pandora, he is instructed by botanist Dr. Grace Augustine (Sigourney Weaver) how to mind-meld with his genetically-matched avatar and thereby control its every move. The human-like hybrid physically resembles a member of the Na'vi (as in naïve, get it?), the 9' tall, blue-skinned tribe of aborigines inhabiting the planet. 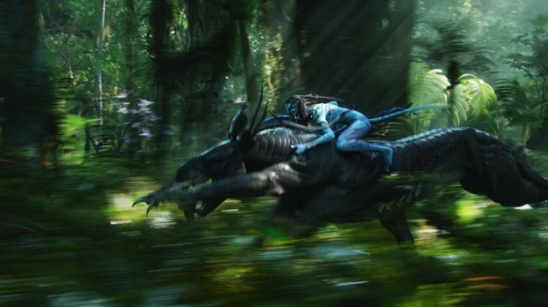 Jake is given just three months by his superiors to manipulate the indigenous people into vacating their sacred land voluntarily, since it sits atop untapped reserves of the coveted unobtainium. However, much to the chagrin of an avaricious, SecFor bureaucrat (Giovanni Ribisi) and an itchy, trigger-fingered Colonel (Stephen Lang), he goes renegade after falling in love with a young native beauty (Zoe Saldana).
Jake switches sides because he recognizes that the much-maligned Na'vi aren't bloodthirsty savages as billed, but noble, spiritually-superior beings living in harmony with nature. So, like a latter-day Tarzan who can talk to the animals, the sensitive alien-whisperer must rally all the creatures of Pandora to come to the defense of their peaceable kingdom in an eye-popping battle royal.
Along the way Cameron pays homage to (although some might say shamelessly recycles) memorable motifs from some of his own films and from "Star Wars," "The Fugitive," "King Kong," "Superman," "Pocahontas," "Predator," "Apocalypto" and "Transformers," as well. That being said, "Avatar"'s prevailing theme is the identical to a certain classic Western for which Kevin Costner won a couple of Academy Awards.
Forget dancing with wolves. Howzabout doing the Funky Chicken with aliens?

To see a trailer for Avatar, visit: http://www.youtube.com/watch?v=cRdxXPV9GNQ