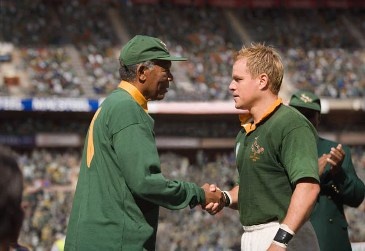 When Nelson "Madiba" Mandela (Morgan Freeman) became President of South Africa, an important aspect of his mission was to help his fellow citizens develop a collective consciousness in the wake of the dismantling of Apartheid. This was to be no mean feat, for that de jure system of segregation had strictly enforced color lines which had kept Blacks and Whites apart and at odds for decades.
Furthermore, the nation had just finished a bloody civil war which left both groups very suspicious of each other's motivations. Whites worried about how they would suddenly be treated as a minority, while Blacks were primarily concerned about improving their lot in life after having suffered second-class status for generations on end.
Although Mandela himself had endured extreme hardships at the hands of the Apartheid regime, including 27 years of brutal incarceration as a political prisoner, he was determined to govern impartially, seeking to balance Black aspirations with White fears. Then, in 1995, with the country set to host the Rugby World Cup Championship, he seized on the idea of using the event to unite the people by encouraging everyone to rally around the Springboks, the South Africa national team. So, ignoring the skepticism of his closest advisors, Mandela announced that, "Reconciliation starts here!"
This is the point of departure of "Invictus," a combination sports saga and historical drama directed by the legendary Clint Eastwood. The film co-stars Morgan Freeman who disappears imperceptibly into his role as elder statesman Mandela opposite Matt Damon who perfected an Afrikaner accent in portraying Francois Pienaar, the captain of the Springboks. The movie is based on the best seller "Playing the Enemy: Nelson Mandela and the Game That Made a Nation" but takes its title from William Ernest Henley's classic poem containing the immortal lines: "In the fell clutch of circumstance… I am the master of my fate; I am the captain of my soul."
A critical component of Mandela's plan involved inspiring Pienaar and his teammates to embrace the motto "One team, one country!" Still, a slogan alone would not be enough, which meant Mandela also needed the Springboks to rise to the occasion and prevail in the tournament, if his novel notion were to take hold and sweep across the land. This is why he brought them on an outing to the infamous Robben Island, sharing those memorable lines from "Invictus" which had sustained him during his incarceration in a dank prison cell there.
The movie works better when recounting such poignant, personal interludes which reveal Mandela's complicated psyche than during the scenes recreating rugby matches staged in Ellis Park Stadium. Unfortunately, "Invictus" focuses far more on the latter than the former, thereby subtly attributing South Africa's critical turn towards racial reconciliation more to a fairly-formulaic, sporting exploits than to the wise insights of a sage leader who envisioned forgiveness as the only path to a lasting peace.
"The rainbow nation starts here!"

To see a trailer for Invictus, visit: http://www.youtube.com/watch?v=54HlG54IY6E