Film Review: 'The Blind Side' 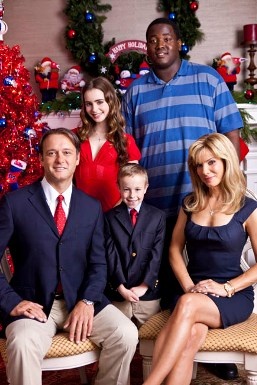 What is it about the holiday season and heartwarming tales revolving around an orphan who's miraculously saved by some selfless act of charity? This year's contribution to the tried-and-true genre is "The Blind Side," a real-life story based on Michael Lewis' best seller of the same name.
Superficially, the picture's plot resembles the typical, Cinderella-themed sports saga with a fairy tale ending. After all, it chronicles the gridiron exploits of Michael Oher (Quinton Aaron) as he pursues a dream of playing pro football from high school through college en route to a promising NFL career which, by the way, he has just begun this season with the Baltimore Ravens.
But Michael's chances of making it were complicated by the fact that he was not only abandoned by his parents and homeless but also illiterate and practically mute. Those odds improved immeasurably the day the beleaguered Black teenager is spotted living on the streets of Memphis in the middle of winter by Leigh Anne Touhy (Sandra Bullock), a wealthy, White socialite who is shocked to learn that he was one of her daughter Collins' (Lily Collins) classmates.
When she brings Michael home for a bath, he cleans up nicely and gets along well enough the family, that after a good night's sleep in a warm bed they decide to keep him. So, Leigh Anne hires a tutor (Kathy Bates) to help him get his grades up, while son S. J. (Jae Head) serves as the gentle giant's personal trainer.
Written and directed by John Lee Hancock ("The Alamo"), "The Blind Side" is best approached as the antiseptic version of "Precious" designed for the tweener demographic. Where the relentlessly-harrowing "Precious" is raw and unnerving, "The Blind Side" presents relatively unthreatening scenarios subtly suggesting that the solution for the host of woes visited upon ghetto dwellers lies in being rescued from their misery by wealthy benefactors.
It's fun to pretend, ain't it?

To see a trailer for The Blind Side, visit: http://www.youtube.com/watch?v=khtBvQdxta4