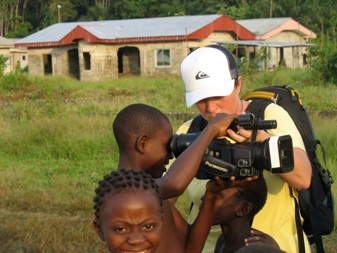 "Sweet Crude," about the struggle for resource control in the Niger Delta of Nigeria, is showing at the 36th Northwest Film & Video Festival, Saturday, Nov. 14, 2 p.m. at the Northwest Film Center's Whitsell Auditorium, inside the Portland Art Museum, 1219 SW Park Ave.

Filmmaker Sandy Cioffi, pictured at left, and her Seattle-based film crew made local and international news last year when they were imprisoned by the Nigerian military along with their Nigerian colleague.
The director has made four trips to the oil-producing Niger Delta region and is considered one of the most knowledgeable sources outside Nigeria on the crisis there, first visiting the Niger Delta to document the building of a "peace" library in 2005. Pulled into the confidence of a group of college students who would become the new insurgency known as MEND (Movement for the Emancipation of the Niger Delta), Cioffi began to follow a much bigger story – the largely unknown human and environmental toll from 50 years of unregulated oil extraction, the history of non-violent protest by Niger Deltans demanding control of their own resources and the emergence of the militancy.
Sweet Crude won the Special Jury Prize at DMZ Korean International Documentary Festival, Best Documentary at the Strasbourg International Film Festival, Best Feature at the Newburyport Documentary Film Festival, Audience Choice Feature Film at the Tallgrass Film Festival, Best Documentary at the Ellensburg Film Festival and the Lena Sharpe Award for Persistence of Vision at the Seattle International Film Festival – all in 2009.
The film also ran in Los Angeles and New York in August as part of IDA DocuWeeks™, a theatrical showcase designed to give a few outstanding documentaries each year a chance to qualify for Oscar nomination.
The 36th Northwest Film & Video Festival runs Nov. 6-14.