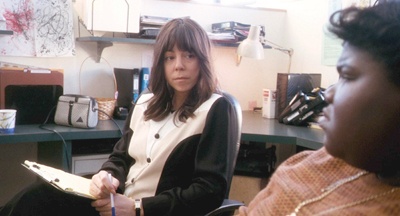 "Precious" is finally arriving in theaters after being the beneficiary of practically a year's worth of buzz since winning a trio of trophies at Sundance, including that prestigious film festival's equivalent of Best Picture. I'm happy to be the bearer of the good news that the movie more than lives up to the critical acclaim.
Based on the novel "Push" by Sapphire, that relentlessly-raw best seller has been faithfully adapted by Lee Daniels, the producer of "Monster's Ball," the flick for which Halle Berry won her Academy Award in 2002. There's a good chance that Daniels is about to repeat that historic feat, for he has coaxed an Oscar-quality performance out of comedienne-turned-actress Mo'Nique, who is riveting here as one of the most monstrous screen villains in memory.
Set in Harlem in 1987, this remarkably-realistic tale of woe is narrated by Clareece "Precious" Jones (Gabby Sidibe), an overweight and illiterate, 16 year-old still in junior high. She claims to enjoy Math class because, instead of opening her textbook, she simply sits there fantasizing about sleeping with her teacher, Mr. Wicher (Ean Sheehy). However, as the film further unfolds, being behind a few grades turns out to be the least of the portly pepperpot's problems.
Over the protests, "I do my work," and "My grades is good," Precious is still suspended from school for being pregnant. We also learn that she is not only expecting, but already has a daughter with Down Syndrome. So, between the absentee-father who impregnated her, and the relentlessly-abusive mother (Mo'Nique) who insists she'll never amount to anything, it's no surprise that Precious frequently escapes into a parallel universe where she daydreams about being rescued from her nightmarish existence by "a light-skinned boyfriend with good hair."
But while desperately awaiting that proverbial "knight in shining armor" to materialize, Precious finds herself repeatedly slapped in the face, whether literally, by her mom, or figuratively, by a social service bureaucracy way too willing to let her slip through the cracks. The all but lost teen is shuttled back and forth between well-meaning, if ineffective lifelines, like her clueless welfare case-worker (Mariah Carey) and a kindly nurse (Lenny Kravitz).
Tragically, no one seems to have any answers until Precious goes back to school where her compassionate GED teacher (Paula Patton) takes a special interest in her well-being. Nonetheless, nurturing the self-esteem of a life-long doormat calls for a Herculean effort that might prove beyond the resources of resolute Ms Rain.
As poignant as it is shocking, Precious stands as an undeniably authentic contrast to those ghetto fabulous adventures celebrating macho, misogynistic, malevolent and misanthropic behavior presumably of no emotional consequence. A searing, inner-city saga of transformation and triumph, and a masterpiece not to be forgotten during awards season.

To see a trailer for "Precious," visit: http://www.youtube.com/watch?v=b5FYahzVU44