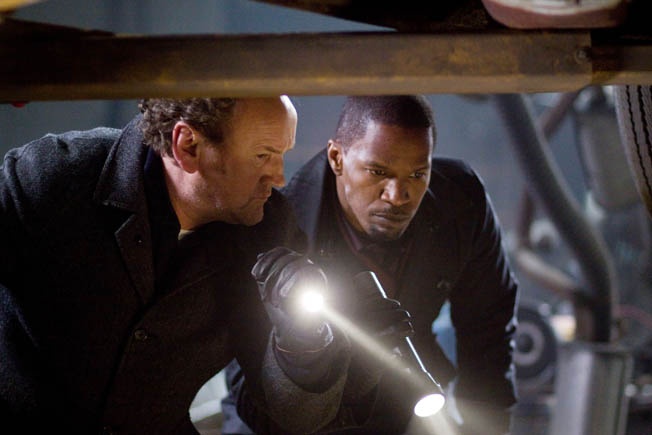 Burglars Clarence James Darby (Christian Stolte) and Rupert Ames (Josh Stewart) both broke into the suburban Philadelphia home of Clyde Shelton (Gerard Butler) and forced him to sit and watch helplessly while they brutally murdered his wife (Brooke Mills) and daughter (Ksenia Hulayev). However, only one of the perps had to pay for the crime, since the former was permitted to turn state's evidence and testify against the latter under the terms of a plea deal which let him off with a slap on the wrist.
Consequently, Clarence was set free while his co-conspirator was sentenced to death and executed by lethal injection. This outcome made perfect sense to most of the people in the courtroom, such as the judge (Annie Corley), the District Attorney (Bruce McGill), Prosecutor Nick Rice (Jamie Foxx) and his assistant, Sarah (Leslie Bibb), but it never sat well with Clyde, the actual victim of the crime.
He felt that the politically-ambitious Rice had cared more about maintaining his 94 percent conviction rate than the fundamental question of whether or not justice was being served. So, over the next decade, he set about methodically planning to exact a measure of retribution, and then some. For, what nobody suspected was that this mild-mannered family man secretly happened to be a retired CIA Agent/assassin/genius inventor/mad scientist all rolled into one, which means he's the wrong guy to make into an enemy.
Fast-forward to the present, and we see that this "Law Abiding Citizen" has morphed into a bloodthirsty vigilante with a hit list containing the names of Clarence and everyone he considers responsible for a guilty man still being able to walk the streets. What ensues is a gruesome splatter flick ostensibly designed by director F. Gary Gray (Be Cool) to up the ante in terms of the revenge genre's generous helpings of gratuitous gore.
As suavely played by Gerard Butler, Clyde proves to be an increasingly-unsympathetic cross of Hannibal Lecter and Paul Kersey, the obsessed protagonist played by Charles Bronson in the "Death Wish" franchise. It is easy to understand why he might want to behead Clarence after first castrating the creep with a scalpel, but he begins to lose the audience's support when he subsequently sets his sights on the legal community.
Nonetheless, even after he's apprehended and arrested for taking the law into his own hands, Clyde's reign of terror magically continues, courtesy of high-tech wizardry ranging from booby-trapped cell phones to remote-controlled napalm bombs to weaponized robots. In fact, he manages to slay so many more victims while incarcerated that the frustrated mayor (Viola Davis) decides to declare martial law and to issue shotguns to meter maids.
Don't be duped by "Law Abiding Citizen's" prevailing "victims' rights" theme into thinking this a morality play questioning the legitimacy of the criminal justice system. Quite the contrary. Sure, Jamie Foxx's character might have made a mistake, but certainly not one that he should have to pay for with his life. And by the time the big showdown between Nick and Clyde arrives, don't be surprised to have shifted allegiances from the grieving widower-turned-madman over to the well-meaning prosecutor full of regret.
A high-octane, high body-count thriller posing the question, how do you stop a psycho on a killing spree who's already behind bars? Apparently, by any means necessary.

To see a trailer for Law Abiding Citizen, visit:
http://www.youtube.com/watch?v=FMoP35u8oN0