You Can See 'Passing Strange' Free 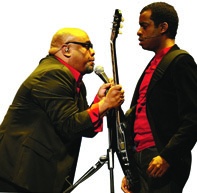 See the great new movie free! On Sept 9th -13th at the NW Film Center, 1219 SW Park Avenue, Portland.
To qualify you must e- mailto:Advertising@theskanner.com saying that you want tickets for the Spike Lee movie, and include your Name, address and ZIP code.
To pick up your tickets you must come in to the Front Desk at The Skanner, 415 N. Killingsworth St., Portland, Oregon
Limit 2 Tickets. Limited to supply on hand.

"Passing Strange" is a documentary film melding the final three live Broadway performances of the award-winning Broadway musical by singer/songwriter Stew (with music co-written by his creative partner, Heidi Rodewald). This is the story of the conflict between a young man, his Christian mother and the life he leads growing up in Los Angeles. The aspiring recording artist, known in the film simply as "Youth," travels to Europe to finds his true self, in the tradition of African American artists Josephine Baker and James Baldwin. It is only as he travels far from home that he is able to come to grips with what he left behind. Original music, narration and production by Stew, directed by Spike Lee. Cast includes De'Adre Aziza, Daniel Breaker, Colman Domingo, Chad Goodridge, Rebecca Naomi Jones, Eisa Davis, and Stew.