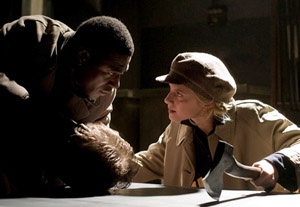 Quentin Tarantino took over ten years to finish writing the script for "Inglourious Basterds," and fans of his grisly brand of splatter fare will undoubtedly find the film well worth the wait. This gruesome World War II saga stars Brad Pitt as Lieutenant Aldo Raine, a half-breed hillbilly from Tennessee who assembles an all-Jewish unit of American GIs for a Nazi scalp-hunting party across occupied France.
Superficially, the storyline resembles that genre of classic war flicks from the Sixties which revolved around a ragtag team of irregulars undertaking a dangerous mission behind enemy lines, pictures like "The Dirty Dozen" (1967), "Where Eagles Dare" (1968), "The Train" (1964), "Von Ryan's Express" (1965), "The Devil's Brigade" (1968) and "The Guns of Navarone" (1961).
The difference in this case is that Tarantino has, in his trademark fashion, upped the ante in terms of gratuitous gore while devoting considerable time to character development in service of a fanciful tale of sweet revenge that's partly historical, partly the product of his own fertile imagination.
Don't be put off by all the explicit gore, for it is ultimately vindicated by "Inglourious Basterds'" disturbing, self-referential way of delivering a thought-provoking message not only about war and man's inhumanity to man, but about our insatiable lust for movies about war. Let the debate begin over whether Tarantino is ultimately sanctioning or condemning the exploits of Aldo and company by juxtaposing them against the utterly reprehensible behavior of the dastardly Jew Hunter, the most despicable screen villain since that creep in "No Country for Old Men."

Regardless, Quentin again proves himself a master yarn-spinner adept at keeping his audience both entertained and on edge for the duration, ever so deliberately milking the maximum amount of tension out of each of his tautly-edited five acts. Quentin Tarantino's best yet, a seamless, tour de force not to be missed.