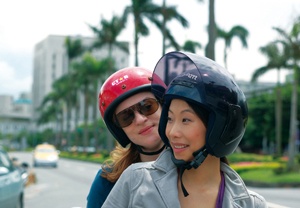 Ya-ching Chen (Yi-Ching Lu) comes up with so many reasons to deny her daughter Ai-ling (Huan-Ru Ke) permission to travel to Hamburg to visit her Uncle Chen Fu (Jack Kao), it starts to sound suspicious after awhile. First, she reminds her impatient offspring of an upcoming dance audition. Then, she tells her that the food in Germany is terrible, and that her tongue will end up in knots from trying to speak the language.
And when none of the above works, she warns that as the owner of a couple of flourishing Chinese restaurants Uncle Chen won't have any time for her. For Ya-ching knows that her daughter's reason for making this long trip from Taiwan to Europe in the first place is to learn as much as she can from him about her late father.
But Ai-ling stubbornly refuses to take "No" for an answer, and finally departs with her mother's blessing. However, upon her arrival, she discovers that her mother was right about Uncle Chen being busy, for he immediately asks Patrick (Kevin Chen), one of his employees, to escort his niece while she's in town.
So, Ai-ling starts hanging out with the handsome hunk, primarily to pump him for information about her evasive Uncle who she suspects might be hiding a big secret. But she becomes frustrated because all Patrick has to offer is that his boss never talks about Taiwan or anything personal for that matter.
Although Ai-ling and Patrick are both about the same age, love doesn't develop between the two, because she is gay. So, when he takes her to the movies, she instead finds herself attracted to Sophie Schmitt (Inga Busch), the flirtatious stranger sitting on the other side of her. Soon the two lesbians are dating, and possessive Sophie starts sending the object of her affection urgent text messages like, "You've put a spell on me. Please release me and give me a call." But then, just as their romance is blossoming, Ai-ling dies mysteriously under unexplained circumstances.
This is the point of departure of "Ghosted," an intriguing whodunit from Monika Treut, a director from Deutschland best known for her graphic exploration of homoerotic themes. Here, however, her focus is less on sexuality and more on the possible murder at the center of the story. For although the German authorities call Ai-ling's death a suicide, Mei-li Wang (Ting-Ting Hu), a writer for the Taipei News, decides to conduct her own investigation.
She tracks the still-grieving Sophie down for an interview about her whirlwind affair with Ai-ling. Via a series of vivid flashbacks, Sophie reconstructs the events leading up to the day her lover died. It soon becomes clear that Ai-ling was murdered and that there are many suspects who might be responsible for the crime.
Could it be Uncle Chen, who didn't want anyone to know that Ai-Ling was his daughter? Or was it Patrick, who might have been upset about being rejected, especially for a woman? Then there's Herr Lee (Nik Dong-Sik), the mobster who had been blackmailing Uncle Chen? How about Leon (Marek Harloff), Sophie's next-door neighbor who always leered at Ai-ling? Or Katrin Bendersen (Jana Schulz), the lecherous lawyer trying to steal Ai-ling away? And finally, could Ai-ling have been killed by the Asian barfly (Wen Nai) with blonde hair who had a crush on Sophie?
While getting to the bottom of the case, Mei-li and Sophie generate a little chemistry of their own. And it all leads to a very surprising resolution that it would be unfair for me to spoil. I will say that the movie opens and closes in Taipei, where director Treut devotes considerable attention to an examination of some ancient Chinese traditions, particularly, Ghost Month, the seventh month of the Taiwanese lunar calendar which serves as the source of inspiration for the picture's title.
During Ghost Month, many precautions must be taken at this time during which some sumptuous banquets are prepared and numerous rituals are followed in order to ward off or appease the evil spirits of the dead which are wandering the Earth. The exact origins of Ghost Month are unknown, but it is closely connected with the Han belief in life after death and ancestor worship.
As for the acting performances in "Ghosted," kudos are in order for the talented Ting-Ting Hu, who proves not only pleasant to watch on the big screen, but who is obviously as comfortable working in English and German as in Mandarin. Miss Hu obviously deserves a shot in a breakout role in a Hollywood blockbuster next. And the yummy Yi-Ching Lu is just as easy on the eyes, although she could benefit from a few English lessons before she tries to follow Ting-Ting to Los Angeles.
A compelling crime saga with supernatural overtones made all the more worthwhile by some spectacular Taipei locales and its celebration of Chinese culture.