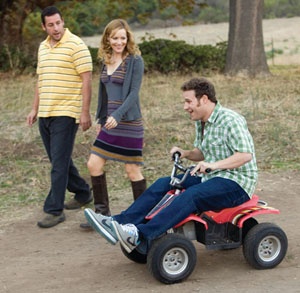 Most people are probably unaware that at the beginning of their careers Adam Sandler and Judd Apatow shared an apartment in Los Angeles. That was back in the Eighties when they were still paying their dues as struggling standup comics.
They went their separate ways once Sandler was invited to join the cast of Saturday Night Live in New York City, while Apatow remained in L.A. where he would eventually meet with phenomenal success producing such raunchy teensploits as "Anchorman," "Knocked Up," "Superbad," "The 40 Year-Old Virgin," "Forgetting Sarah Marshall" and "Pineapple Express."
Now, the former roommates have reunited to make "Funny People," a bittersweet buddy flick about a terminally-ill, middle-aged, Hollywood icon (Sandler) who decides to give an aspiring, young comic (Seth Rogen) working in a deli the big break he's been waiting for.
Written and directed by Apatow, the semi-autobiographical adventure marks a macabre departure from the superficial scatology and sophomoric slapstick with which the bottom-feeding filmmaker's name has come to be associated.
By contrast, this relatively-cerebral indulgence amounts mostly to a maudlin meditation on the meaning of life which simultaneously attempts to pay homage to every comedian who ever tried to make it in Hollywood. The dialogue relies heavily on a flip brand of humor reminiscent of the inside industry banter popularized by the hit HBO series "Entourage."
At the point of departure, we find George Simmons lounging around his sprawling mansion where he's dividing his time between making phony phone calls and perusing script proposals poolside. The shallow Romeo also has his pick of the litter from among the adoring throngs of groupies who throw themselves at him, although it's clear that he's only interested in one-night stands.
Everything changes the day he receives a sobering diagnosis of late-stage leukemia from his Swedish doctor (Torsten Voges). With less than a year to live, friendless and estranged from his only sibling (Nicol Paone), George becomes desperate for a shoulder to lean on. So, he offers delicatessen counterman Ira a job as his joke writer and opening act, secretly hoping to find a confidante he can count on in the process.
So, Ira moves out of his bachelor pad where he had been living with a couple of other comics, Mark (Jason Schwartzman) who has recently developed a swelled head since landing a recurring role on a TV sitcom, and Leo (Jonah Hill), a loser who's still on the outside of showbiz looking in. Together virtually 24/7, George and Ira prove to be good for each other and gradually bond, with the former grudgingly showing his protégé how to hold an audience in the palm of his hand, while the latter helps his boss appreciate what really matters.
The plot thickens when George's ex-girlfriend, Laura (Leslie Mann), shows up in an empathetic mood which waxes romantic. For she happens to be married, albeit unhappily, to a philanderer (Eric Bana) with whom she has a couple of daughters (Maude and Iris Apatow).
En route to the surprising resolution, director Apatow pays tribute to his fellow comics at every turn via a dizzying number of "blink-and-you-missed-it" cameos by the likes of Charles Fleischer, Dr. Ken Jeong, Carol Leifer, Andy Dick, George Wallace, Paul Reiser, Sarah Silverman, Dave Attell and Norm MacDonald. It is telling that all of the above would be upstaged by Eminem typecast in a hilarious appearance as a rap star who resents being stared at by a fan he doesn't realize is Ray Romano.
Clocking in at almost 2½ hours, "Funny People" has its moments but suffers from about 30 minutes of filler that could have easily hit the cutting room floor, like a musical performance by James Taylor. What's up with that? Furthermore, the film felt like it was about to end on more than one occasion, only to tack on another unnecessary twist again and again. That wouldn't have been a problem, if this were a typical Sandler or Apatow chucklefest, but it's a no-no for such somber material.
Proof that when bad things happen to funny people, they might not be that funny anymore.

To see a trailer for Funny People, visit: http://www.youtube.com/watch?v=D-sLP6jd3n8