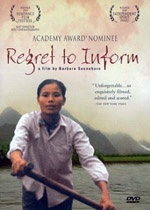 America has long romanticized war in movies as a patriotic exhibition of bravery and as an unquestioned rite of passage for boys of many a generation. Have you ever stopped to wonder why we glamorize war? "Saving Private Ryan" received won five Oscars and grossed over $200,000,000 at the box office.

In this critic's opinion, far from delivering an anti-war message, that film, with its underlying patriotic, patriarchal theme of let's do it for mom, the flag and apple pie, celebrated war and only served to further whet the American male appetite for violence. The question of whether women even wanted their sons and husbands to go off to war in the first place is never raised.
By way of comparison, relatively few people have even heard of, much less seen, "Regret to Inform," another Oscar-nominated war movie of 1999. This critically-acclaimed documentary, a testament to the widows of the Viet Nam War, only made a paltry $22,000 during its original theatrical run a decade ago. It is a tragedy, really, that so many missed this film, given the profoundly moving experience it offers. Fortunately, thanks to the Human Rights Watch Film Festival (http://www.hrw.org/iff/), you now have a second chance to see this cinematic masterpiece.

The film was directed by Barbara Sonneborn, whose own husband, Jeff, was a soldier killed in action on her 24th birthday, just eight weeks after he arrived in Vietnam. "We regret to inform you…" began the official notice she received. The young widow reacted with shock, grief, anguish, torment and so many unanswered questions.
She struggled to make sense of the loss of her husband. How could he not come back? What is war? How far does it reach? Twenty years after his death, with so much still unresolved, Sonneborn was compelled to do something about it.

As an artist who in the intervening years had become a practicing Buddhist, she began seeking out other widows to share stories with in order to grieve and to heal. And because, to a pacifist, sides don't matter, Sonneborn felt it was necessary to give voice to widows on both sides. So she went to Viet Nam.
"Regret to Inform" weaves a piercingly evocative patchwork quilt using the widows' own narratives of lives devastated by the Viet Nam War. By film's end, one is convinced of the utter, absolute insanity of the war. Furthermore, on a deeper level, one cannot avoid contemplating the sexist underpinnings to war and the racist rationalizations which often accompany war.
Fortunately, Ms. Sonneborn had the wherewithal to include the unique, yet still universal, perspectives of black and Native-American widows for the project. Thus, Norma Banks, an African-American widow who appears in the film, reflects about her husband: "He would tell me that there is no glamour in war. He was not proud of it. In order to survive there, he had to keep killing. He didn't do it for love of his country. He had to keep killing just to survive. As much as I want to bury my own grief, I think the truth needs to be told…Our men fought the war and they were the soldiers. But the widows, we, too, are warriors. No one understands what we have to go through long after the war is over."
By contrast, a Navajo widow from Arizona remarks, "Once he saw all of the killing… the Vietnamese looking just like him, just about the same skin color, the same height… it really made him think, what am I doing here?"

Meanwhile, the Vietnamese widows couldn't believe an American really wanted to hear their stories. But for them, too, the opportunity to share opened the floodgates. Tears flow as experiences are recalled. "The cruelty we experienced was longer than a river, higher than a mountain, deeper than an ocean," one recounts wistfully.
With a measured pace, the film unfolds against the breathtaking backdrop of an agrarian, peasant country still slowly recovering from the sorrowful scars of years and years of battle. The film had so many heartrending moments, because each reminiscence casts its own unique, tragic shadow. Perhaps the most powerful scene featured the inter-splicing of the American and Vietnamese War Memorials, since both monument are engraved with thousands of names, although the Vietnamese one also includes the ages of the deceased: 43, 100, 17, 6, 22, 35, 87, 2, 11, 5…
Barbara Sonneborn closes by assessing how making the film transformed her. "It has deepened me." For, after seeing the suffering of so many women on both sides, her rage has finally disappeared. "The experience has brought me to my knees and expanded my compassion and my understanding of sorrow and suffering and joy. It was a great privilege to make this film. In the end, I consider Regret to Inform a gift from my husband, Jeff."

In English and Vietnamese with subtitles.


The Human Right Watch Film Festival will be running in NYC from June 11-25. "Regret to Inform" will be screened at 4 p.m. on June 17 at the Walter Reade Theater, located at 165 W. 65th Street in Manhattan.

To see a trailer for Regret to Inform, visit: http://www.videodetective.com/TitleDetails.aspx?publishedid=00811409