Kam Williams, Special to The Skanner
Published: 20 May 2009 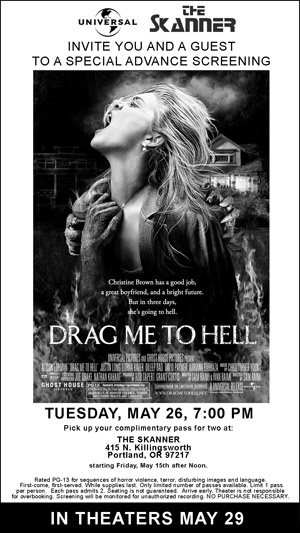 In 2000, the Wayans Brothers made a big splash with "Scary Movie," a hilarious spoof of horror flicks. Since that phenomenal franchise has raked in about a billion dollars at the box office, it's no surprise that it also spawned a cottage industry of imitators, including such similar parodies as "Not Another Teen Movie," "Date Movie," "Epic Movie," "Superhero Movie," "Meet the Spartans" and "Disaster Movie."
Now the Wayans have returned to the genre with "Dance Flick," a spoof of dance films featuring plenty of their relatives both in front of and behind the camera. Directed by Damien Wayans, the picture is based on a script he co-wrote with his Uncles Shawn, Keenen Ivory, Marlon and Cousin Craig. Plus, the movie stars 10 Wayans: Damon, Jr., Kim, Shawn, Marlon, Craig, Keenen, Chaunte, Michael, Cara Mia and Gregory.
Recently, Shawn and Damien shared their thoughts with me not only about making the movie but about being members of a family which has become as associated with acting as families with pedigreed thespian lineages like the Barrymores, the Phoenixes, the Fondas, the Bridges, the Baldwins, the Arquettes and the Redgraves.

KW: Shawn, the first time I ever interviewed you was at the Four Seasons for "Scary Movie." What took you so long to parody another genre? After all, the Wayans revived the whole interest in spoofs with "Scary Movie." But then everybody started ripping off your idea.
SW: You mean, "Not a Wayans Movie." Yeah, we did start something, but we took time off to pursue some other projects. Then, when we missed having that kind of fun, we picked a genre that we wanted to lampoon and went back at it.
KW: Damien, this movie marks you feature film directorial debut. How challenging did you find it?
DW: Well, as a first-timer, there's always going to be challenges. But I had my family around, and that's always good, since they're funny guys and add to the process. If they were unfunny, that would probably be a problem. They're also producers who understand that they have a brand, who know how to execute that brand and to make sure that comes across. And I think they did a good job.
KW: Did you have a hard time commanding the respect of your veteran actor relatives in the cast, being younger than them?
DW: Nah, they all listen. They're uncles, and at the end of the day, they want that respect. And they earned it.
SW: We all respected each other. We thought he was the guy for the job because we knew he had the talent to be able to do this. It was a really fun, family project, and we had a good time.
KW: Why is it so many actors and actresses I interview credit a Wayans brother for helping them get their start?
SW: Yeah, we've helped a lot of folks. [Chuckles] But we had help. My brother Keenen helped us. So, we try to help other people who share that passion and are serious about comedy.
KW: I see that five of you worked on the script for "Dance Flick." What was involved in that process?
SW: We just went into a room, drank some green tea, began feeling jittery, and started being funny. [Laughs]
KW: When coming up with ideas, do you think about how expensive it will be to shoot a particular stunt?
SW: Yeah, as you get closer to the actual time when the movie's going to be shot, the more challenging the stuff you wrote hopped-up on green tea becomes to execute.
DW: [Laughs] Exactly!
KW: Attorney Bernadette Beekman asks, who do you think would make a good Supreme Court Justice?
SW: Who do I think would make a good Supreme Court Justice? Michelle Obama.
DW: I'm a go with Judge Mathis, or Oprah. [Chuckles]
SW: Hold on, he's got more questions. You might want to save Oprah.
KW: You might answer Oprah to The Rudy Lewis question: Who's at the top of your hero list?
DW: Keenen.
KW: The bookworm Troy Johnson question: What was the last book you read?
SW: "Eat Right for Your Metabolism" by Felicia Drury Kliment.
DW: Mine was Donald Goines' "Black Girl Lost."
KW: Bobby Shenker wants to know whether that hilarious "Men on Film" sketch from "In Living Color" will ever be adapted in to a movie.
SW: Will it ever? I can't say whether it might ever make its way to film, but I can't never either.
KW: The Tasha Smith question: Are you ever afraid?
SW: I guess of flying.
DW: If he didn't say that, I was just about to say it. That man is nervous about flying.
SW: I don't really like flying, and I ain't down with getting in the ocean either. Sharks!
DW: Me, I was a little nervous about this movie until Keenen calmed me down when he came in and said, "You're doing a good job. You rock!"
KW: When you look in the mirror, what do you see?
DW: I know what Shawn sees. You see Grandpa, because you look just like him.
SW: What do I see? A hard worker.
KW: What advice do you have for anyone who wants to follow in your footsteps?
DW: I would say, to keep the hustle alive, never take "No" for an answer.
SW: And stay close to your family, and teach those younger than you how to do it.

To see a trailer for Dance Flick, visit: http://www.youtube.com/watch?v=hPAFefgP23Q