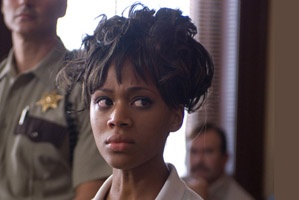 On Nov. 2, 2000, drug enforcement agents executed a sweep of the black community in the tiny town of Hearne, Texas, arresting 27 African-American residents, including a grieving father who was taken into custody during the funeral of his young daughter. The bench warrants had been issued by the county on the word of an informant who claimed to have purchased crack from each of the accused, despite the fact that the ex-con was the sole eyewitness, had a history of mental illness, and was himself facing criminal charges at the time.
Nonetheless, the District Attorney aggressively pursued convictions in all of the cases, generally succeeding since most of the defendants couldn't afford to make bail, let alone hire a lawyer. What generally transpired was that after languishing in jail for several months while awaiting trial, many succumbed to the pressure of their court-appointed public defender to plead guilty to a lesser charge in return for leniency, rather than face the possibility of a lengthy prison sentence.
In actuality, these unfortunate folks from the projects had all simply been victimized by a state-sanctioned scheme to incarcerate innocent African Americans. Ultimately, the ACLU would clear their names with the help of one of the defendants, an intrepid woman willing to risk further incurring the wrath of the local authorities by testifying against them in a lawsuit proving a color-coded pattern of malicious prosecution.
The intimate details of her lengthy ordeal, set against the backdrop of that landmark case, is the subject of "American Violet," a gripping dramatization of the events surrounding the sad tragedy, which ruined many a family in Hearne. Directed by Tim Disney (Blessed Art Thou), great-nephew of the legendary Walt Disney, the movie stars newcomer Nicole Beharie as Dee Roberts, a 24 year-old single-mother with four daughters whose life comes apart at the seams when she finds herself suddenly ensnared in a dragnet designed to rid the town of black people entirely.
We see that before being framed for a crime she didn't commit, Dee had been getting along if not exactly flourishing, caring for her girls while trying to save enough money from waitressing to study cosmetology someday. But afterwards, she's soon without the financial resources or the emotional support needed to handle the situation.
In matter-of-fact fashion, this brilliant bio-pic effectively illustrates the likely fallout visited upon a law-abiding but unsophisticated person like Dee up against an impersonal legal justice system unconcerned with the truth. For when she is falsely accused of distributing narcotics and held on $70,000 bail, the ripple effect of the ensuing nightmare means that she stands to lose her dignity, her job, her savings and custody of her children in fast order.
Besides the powerful performance of Ms. Beharie, a Juilliard grad, "American Violet" features a smorgasbord of equally-engaging efforts on the part of a talented supporting cast topped by such veteran thespians as Alfre Woodard, Charles S. Dutton, Will Patton, Tim Blake Nelson, Xzibit and Michael O'Keefe.  A movie which earns high marks simply for being the first feature film with the guts to tackle the subject of racial profiling in such an honest fashion, especially given the similar allegations leveled at the neighboring town of Tenaha just last month.
Fair warning: Do yourself and family a favor and steer clear of that racist oasis if you happen to be black and passing through Texas.

To see a trailer for American Violet, visit:
http://www.youtube.com/watch?v=Qv8Jq09qU1Q

To see a news report about Tenaha, Texas, see:
http://www.youtube.com/watch?v=-I80hda3IRI