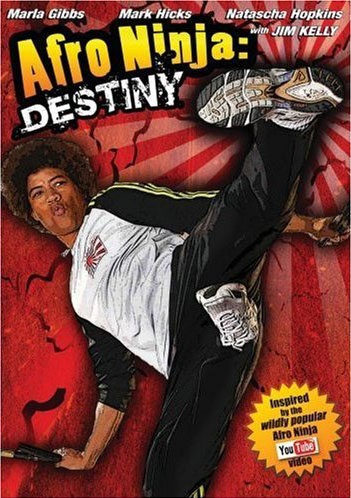 I guess it's not fair to expect much from a movie inspired by a homemade video posted on YouTube, even if the original registered over 80 million hits online. But this is what we have in "Afro Ninja: Destiny," a picture calculated to cash in on the success of an Internet phenomenon. If this is a new trend, can full-length feature spin-offs of Tay "Chocolate Rain" Zonday and Chris "Leave Britney Alone!" Crocker be far behind?


That being said, "Afro Ninja" actually looks more like a throwback to martial arts movies from the 70s, and even includes a cameo by Jim Kelly, who co-starred opposite the legendary Bruce Lee back then in "Enter the Dragon." Regrettably, where that low budget chopsocky at least featured fantastic fight sequences, this cheesy retread has nothing going for it, despite the fact that writer/director/star Mark Hicks takes a credit for choreographing its sloppy stunts.

"Afro Ninja" is so bad it's a challenge to decipher exactly what Hicks was going for here. My guess is that it was designed as a comedy lampooning both the blaxploitation and karate genres. The cast does include a couple of recognizable faces in Marla "Florence" Gibbs of The Jeffersons, and that fast-talking fat guy who plays the delivery man in the latest series of Budweiser commercials.

The picture's plot is straightforward enough. At the point of departure we find the film's protagonist, Reggie (Hicks) harboring an unrequited crush on a pretty co-worker and yearning for his first promotion at the Post Office where he's worked for ten years. His fortunes change the day he opens a mysterious package postmarked 1975, which has just belatedly arrived from Japan. For, the box contains a magic sword, which transforms the hapless loser into a butt-kicking hero with an enormous afro.

Anything this badly acted and cheaply produced, belongs on YouTube.

To see a trailer for Afro Ninja: Destiny, visit: http://www.youtube.com/watch?v=y8mFkDjimvQ